How We Can Help Occupy

I am very proud of my mom. When Occupy Wichita got started, she was there; marching on the streets of downtown Wichita, Kansas. I really respect the fact that she was not afraid to get out early and raise her voice about the economic inequality and injustice that is rampant in our nation. Despite the fact that the Occupation was labeled a “youth movement” early on, my sixty-plus mom had the courage to take a stand with the Millenial riff-raff. 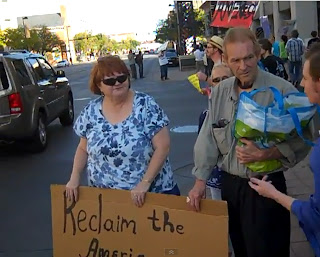 My mom is a very practical woman. She understands how people operate, what their needs are, and how to empower them. So, when she wrote me recently with advice about my blog, I took her seriously. She pointed out that in my calls for engagement on the part of the Church, I had not been very specific. I had not given details about practical ways that folks could get involved with the Occupy Movement. She was concerned that, without details, most folks would assume that the only way to be involved was to camp out, which most of us are not in a position to do.
This made a lot of sense. There are millions of people who support the Occupy Movement. According to a recent survey by CNN, thirty-six percent of Americans “agree with the overall positions of Occupy Wall Street, while nineteen percent say they disagree.” Thirty-six percent! That means roughly one hundred million Americans support the movement. Yet, those who are actively involved in occupations nationwide number merely in the tens of thousands. Why such a great gap between sentiment and action? 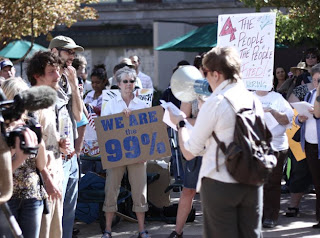 Mom must be right. Most of us cannot take off work to camp out full time; and many of us simply are not comfortable making such a public stand. However, that does not mean that the more than hundred million Americans who support us have to stay on the sidelines. There are many ways to get involved. Let me mention a few possibilities: 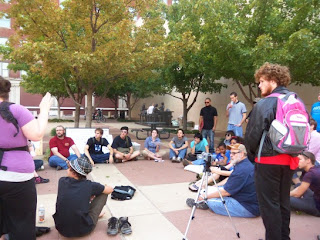 In these, and many other ways, each of us can become a part of the call for change that is rising around the world. The Occupation is not limited to those who are camping; nor is it restricted to the young, the politically progressive, or any other sub-group that we have constructed in recent decades. The Occupy Movement is open to everyone who sees that we are called to live out of faith instead of fear; generosity rather than greed; principle, not politics.
Young and old, employed and jobless, right and left – we can find a better way together. With the gifts that you have, with the resources at your disposal, with the faith of your heart – join us!
Categories Uncategorized
Comments (1)

Since the early days of the Occupy Movement, I and many other scattered believers have been calling on the Church to throw our support behind the call for economic justice and global repentance. Some Christians have been openly involved from the very beginning, and more of us become involved every day. 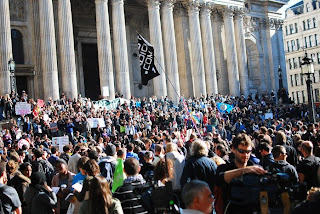 The Occupy Movement continues to gain momentum, a month and a half later. There is now widespread support for the sentiment expressed by the hundreds of occupations in cities around the world: That corporate greed and the hoarded wealth of the richest 1% are unjust, and that the world needs a new, sustainable economic model that is based in the needs of all people, not just the wealthy few.
Anyone who read the Sermon on the Mount could have told you that. So why has the Church remained silent for so long? The followers of Jesus should be at the forefront of movements for economic justice and sustainability; yet, the Church has largely remained on the sidelines. 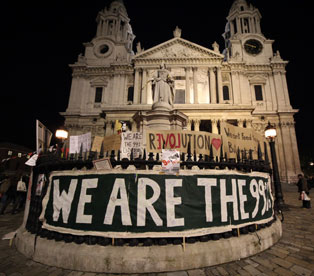 In London, the Occupation is taking place on the grounds of St. Paul’s Cathedral, one of the crown jewels of the Anglican Church. Though this presented an opportunity for the Church to provide both material and moral support to the occupiers, St. Paul’s Cathedral has instead joined in a lawsuit to remove demonstrators from church grounds. The result of the lawsuit could be the forceable removal of the occupiers. This decision has percipitated a serious split among cathedral officials, with several resigning in protest.

The public division within the Church in London is emblematic of the dilemma facing the entire Body of Christ. In the face of rising poverty, systematic injustice and a corporate takeover of the political system, how are we as Christians called to respond? Will we cling to the imagined security of this present order, or will we stand openly with the thousands of women and men who are putting their bodies on the line to call for a more just society? 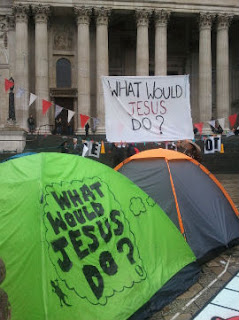 So far, most of us have yet to make a clear choice. Much of the Church stands on the sidelines, waiting to see which way the wind will turn. God hates this. In the Book of Revelation, Jesus speaks to the fence-riding Church, saying: “…because you are lukewarm, and neither cold nor hot, I am about to spit you out of my mouth. For you say, ‘I am rich, I have prospered, and I need nothing.’ You do not realize that you are wretched, pitiable, poor, blind and naked.”(1)
How long will we remain a Laodicean Church? How long will we sit comfortably on the sidelines while the poor are oppressed and the needs of ordinary people are trampled upon by faceless powers and principalities? Will we keep our hands clean from the messy business of social justice when this is precisely the work that our Lord Jesus calls us to? 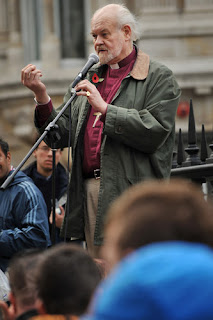 God is calling us to make a decision. There is still time to stand on the side of the outcast, the homeless, the working poor and the tightly-squeezed middle class. There is still time to add our voices to those who have already raised theirs, calling for a changed heart in this land.
But time is running out. As my friend Noah writes, “…this opening to choose won’t last forever. In faithfulness, timing matters as much as showing up.” Our day of visitation is here. Will we respond in faith, or will we shrink back and take the wide, easy path that leads to destruction?
–
1. Revelation 3:16-17
Categories Uncategorized
Comments (2)
« Previous Page