A Step Forward Towards Justice for Bertina

On Friday, I shared the story of Bertina Jones, a resident of Bowie, Maryland, whose home was auctioned off by Bank of America. She lives under the threat of eviction by Freddie Mac, despite the fact that she has done everything she was told to do and has the ability to make her mortgage payments. Despite her desire and financial ability to remain in her home, the banks have refused to listen. They thought they could ignore her and take her home away. 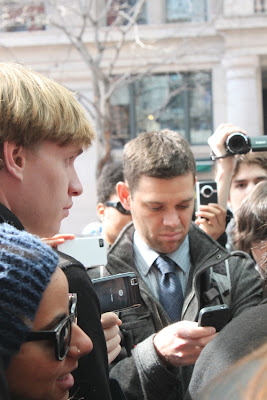 Until yesterday. On Monday, folks from Occupy Our Homes DC showed up at Freddie Mac’s offices in downtown DC to insist that this government sponsored bank be responsive to the needs of ordinary citizens. Bertina Jones, along with a few community representatives, entered the offices and attempted to deliver a letter to the executives inside. Meanwhile, we rallied outside the entrances to the office complex. We chanted, we sang, we performed street theater.

We did our best to let the public know how Freddie Mac is taking advantage of ordinary citizens, throwing them out of their homes. Above all, we made sure executives at Freddie Mac know that we see what they are doing, and that we will continue to disrupt their business as usual until they make it their business to seek justice for the needy. 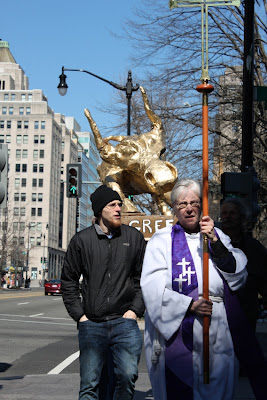 I am pleased to say that the Occupy Church was out in force, playing our own particular role in this important action. We began our vigil in McPherson Square, processing through downtown DC with a paper-mâché golden calf on our shoulders. Robed clergy carried the cross ahead of us as we walked through throngs of office workers and men in expensive suits. Our best song was definitely the foreclosure resistance remix of “Down By the Riverside,” with lyrics such as, “We’re gonna call out predatory banks, down by the riverside… And live in debt no more!”

After a long procession through the city, we arrived at the demostration fashionably late. It seemed as though our arrival had a positive effect, and we were grateful to be able to lift up the Church’s witness that God stands with the poor and those who are struggling under heavy burdens of debt. I was reminded of Jesus’ words in Luke 18, where he observed that even a corrupt judge will listen to those who agitate with persistence. How much more will God listen to we who cry out to him day and night for justice? 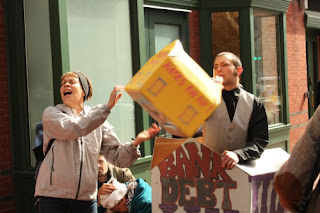 “I tell you, God will see that [we] get justice, and quickly” (Luke 18:8). Sometimes a lot more quickly than we expect. Almost immediately following our mid-day action downtown, Freddie Mac promised to work towards a “positive resolution,”which would allow Bertina Jones to remain in her home. This is potentially a huge breakthrough, showing that the corrupt judges that reign over our financial sector can indeed be swayed by our incessant cries for justice. If we keep up the pressure, we may be able to rescue many more homes from the clutches of foreclosure-happy banks. 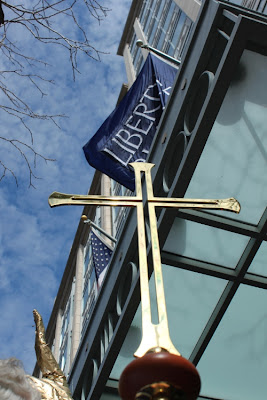 It is important to remember, however, that the battle is not yet won. Bertina’s home remains in jeopardy until the ink is dry on a contract which guarantees the just reinstatement of her mortgage. Until we have legally-binding guarantees from Freddie Mac (and, perhaps, Bank of America) that Bertina’s home is safe, we cannot let up the pressure. We will not be distracted by empty words and false promises. Even as we hope for the best, we are prepared to defend Bertina from eviction. If the big banks want to take her home away, they must be aware that we will not go quietly.

We will continue to cry out for justice, trusting that God hears our voice – and that, eventually, the rulers of this world will, too. We know that there are thousands of people just like Bertina here in the DC metro area, and we will not rest until the big banks have heard their cries for justice. This is just the beginning.
Categories Justice
Comments (2)