Inauguration of the Kingdom 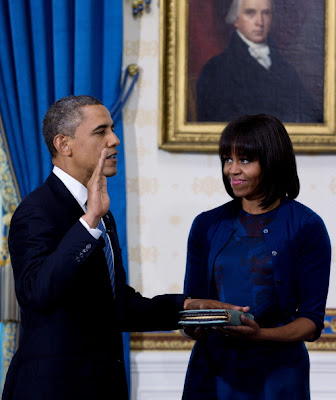 Today, the eyes of the country were focused on Washington, as President Barack Obama was re-confirmed in his position as commander-in-chief of the most powerful nation the world has ever seen. After the most expensive political race in history, Obama presides over a deeply divided country – a nation wracked by structural injustice, income inequality, endemic racism and institutional gridlock. A spirit of division hangs over our nation.
In times like these, it is not surprising that we cling ever more desperately to symbol and ritual. With the bonds of national unity so strained, there is comfort and reassurance to be found in observing familiar forms. That is a what today’s inauguration was all about: it reminds us that, despite all of the battles and vitriol, our society still functions. 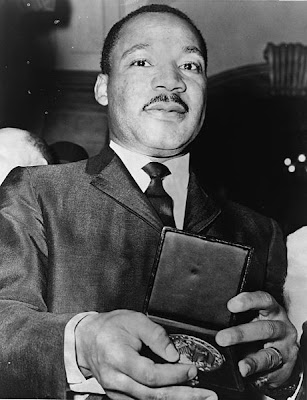 Given our national circumstances, it is not surprising that President Obama chose to enlist the potent legacy of Martin Luther King, Jr., being sworn in on the Bible that King carried on many of his travels during the civil rights era. As America’s first black president, Obama invoked the memory of one of our nation’s greatest African-American prophets.

This choice of symbolism fits with what we know about power. It is the usual move of those in authority to appropriate the charisma and integrity of the martyrs. And today, in a system that is collapsing under the weight of its own violence, greed and oppression, our rulers have all the more need of the mantle of the prophets.
But the prophets continue to speak. I heard one this morning. Cornel West, a distinguished professor and philosopher, explained why “his blood boiled” when he learned that President Obama was to be sworn in on Martin Luther King’s Bible.
Watch:
Can I get an Amen?
We must not tame the prophetic Spirit with our hand on that Bible. We must not quench the prophetic fire that Martin Luther King, Jr. and all of God’s witnesses have shown us. We must not allow the living gospel of Christ’s Kingdom to be appropriated by even the grandest of human kingdoms.
On this Inauguration Day, I will re-commit myself to the inauguration of the reign of the Way, the Truth and the Life. I pray that I will stay awake to the limits of human power, human government and human authority, looking always to the Prince of Peace as the only true leader of one and all. I look for the day that the Spirit who inspires the prophets will come to live and reign in this and every nation.
Categories Uncategorized
Comments (2)