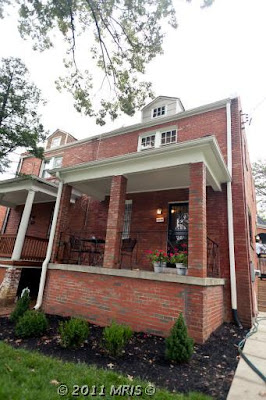 This has been the month of the big move. Faith and I, after years of living together at the William Penn House, took up residence in our new home, four miles directly east on East Capitol Street. Things are very different now. Before, we lived together in a single room, shared a bathroom and shower with a WPH intern, and shared a kitchen with the entire Penn House staff. Now, we have a whole house all to ourselves. We are still getting used to the idea that we have multiplerooms for our exclusive use, not to mention that dinner will not be interrupted by guests from the hostel asking us to tend to their needs.
Moving day was the second of February, and the biggest change so far is definitely the sense of distance from the hustle and bustle of the William Penn House. I am only now beginning to appreciate what an intense experience it was to live full-time in a hostel with up to thirty guests at a time. The sheer energy of the place could be overwhelming, especially when groups rented the entire house. This took a toll on me, and I did not even work there. In Faith’s case, her job, living and social scene were all combined at the Penn House. For her, our new home represents an opportunity for genuine retreat, and to develop a life away from work. 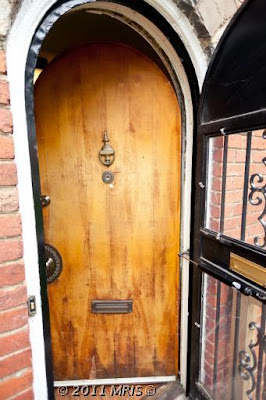 The transition to the new house has been exciting and exhausting. There has been so much to do – hauling, unpacking, setting up our utilities, gathering furniture, and beginning to think about how to decorate. Soon, we will begin getting around to the exterior maintainance that needs doing. In spite of all of the work to do, I suspect that our move has been easier than most. We have had a lot of support from our friends here in the city, especially folks at the William Penn House. Even after the move, Faith spends much of her time back at William Penn House (she works there, after all!), and I visit on a regular basis. We both continue to be part of that community, though the form of our participation is changing. Our relationship with William Penn House is a source of strength.

Besides all the preparations for moving into our new house, the other major focus of my life this past month has been the emerging Occupy Church movement. From the very beginning of Occupy DC, there has been a strong faith component. Folks from a variety of religious traditions have come together to highlight the moral failure of a country in which the vast majority of resources are controlled by an increasingly tiny percentage of our citizens. During the first weeks of Occupy DC, it became clear to several Christian occupiers that we needed an explicitly Christian voice within the Occupy movement, in addition to the wider interfaith network. One night in mid-October, Brian Merritt, Jeremy John and I set up the Prayer Tent in McPherson Square, and Occupy Church was born. 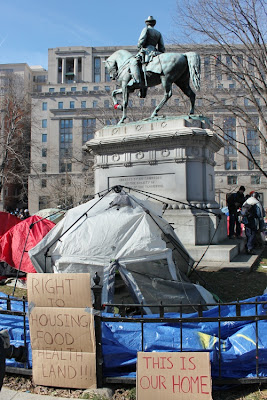 Through the end of 2011, Occupy Church was primarily a solidarity effort within the McPherson Square camp. However, with the dawn of the new year, Occupy Church has begun to move in new directions. As the camping aspect of the Occupy movement has become increasingly marginal, Occupy Church has started to focus its efforts beyond the encampments. We are now holding regular organizing meetings on Saturday mornings, as well as larger, monthly gatherings for everyone who is interested in seeing what a broad-based, ecumenical Christian effort towards economic justice might look like.

The name “Occupy Church” is intentionally ambiguous. First and foremost, it represents our identity as Christians in solidarity with the Occupy movement. We are Christians from a variety of denominations and communions who feel the Holy Spirit calling us to bear prophetic witness to the plight of the poor, and God’s anger with the fact that there are more than forty-five million people living in poverty in this, the wealthiest nation the world has ever known. We feel God calling us to join with the Lord Jesus Christ in proclaiming his good news to the poor – release for the oppressed, sight to the blind, and a Jubilee year of debt cancellation(1). 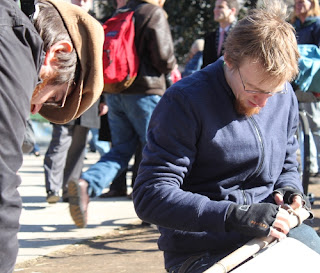 In this sense, “Occupy Church” represents our sense that God is calling us to embody Kingdom values in the world. Far from blessing the insatiable greed of Wall Street and K Street, we believe that God is calling us into a life of selfless giving. Imitating the prophetic life of our crucified Savior, we feel compelled to draw attention to the idolatry of a country where Money and Market are worshiped as gods, and the self-denying love of Jesus is mocked as foolish idealism, at best.

There is, however, another sense in which the name “Occupy Church” can be understood. In addition to the calling we sense to embody Christ’s love for the poor and prophetic witness against idolatrous greed, we cannot help but notice that the Christian community has itself been colonized by the demonic values of Empire. Despite our half-hearted confessions on Sunday morning, the Christian Church as a whole does not bear fruit of genuine repentance. We, too, have been seduced by promises of power and prosperity. As a practical matter, we too have come to worship money as our only absolute. 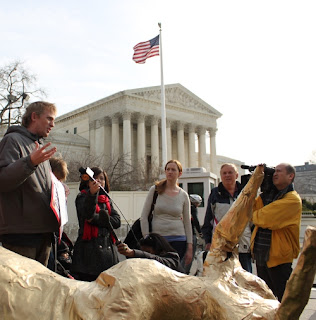 For this reason, Occupy Church cannot only be a witness by the Church to the world. On the contrary, the Church itself must be re-occupied by the gospel of Jesus Christ, whose place in our community has been usurped by false idols of gold, silver and bronze. Occupy Church represents a call for radical reformation within the Church, as well as in the wider society. Both within the Church and beyond it, we feel called to carry the good news that Jesus has for the poor, and the hard work of repentance that will be necessary to change our worldview from one ruled by money to one in which we are embraced by the power of Love.

Please pray for those of us in Washington, DC who are gathering together in the name of Jesus to confront the principalities and powers that have taken hostage our entire society, including much of the Church. Pray that we might grow in spiritual maturity and dedication as we live into the radical call that we are hearing from the Holy Spirit in these days. Also, I would ask that you prayerfully consider whether God is calling you to get involved in the Occupy Church movement. This is only the beginning, and it will take far more than a small band of brothers and sisters in Washington, DC to effect a reformation of the ecumenical Christian Church.
As I have become fond of saying, we are on a Fifty Year Plan. We have no illusions about easy victories or quick fixes. We are in this struggle for the long haul, and we pray that you will join us in the long march towards an economy based in love rather than greed.
Your friend in the love and light of our Savior,
Micah Bales
–
1. Luke 4:18-19
Categories Justice
Comments (1)