Two friends recently passed along this article from the New York Times, which describes a charismatic megachurch in whose focal point is a chain of prayer, praise and worship that has been unbroken since 1999. At their meeting place in Kansas City, Missouri, the International House of Prayer has maintained 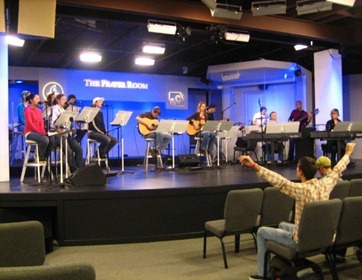 ongoing worship services, day and night, for more than a decade. They intend to keep it up until Kingdom come.

As my friend Martin Kelley points out, perpetual adoration has been practiced by Roman Catholics for centuries. Indeed, continual prayer has been a feature of many Christian movements throughout the history of the Church. In particular, it has been a staple of Christian monasticism. The International House of Prayer, however, is anything but monastic in character.

Something I like about International House of Prayer is its outward focus. IHOP is not primarily a contemplative community, but is oriented toward mission to the wider world. Even if I am uncomfortable with some of the directions that this mission takes, I do appreciate that it sees the fruit of prayer as being a sent into the world. IHOP embraces a view of prayer and holiness that changes both the individual and the Church, equipping women and men for ministry. IHOP 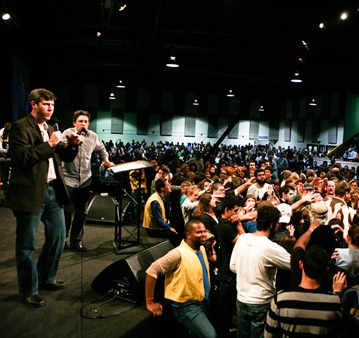 does not see prayer as primarily a private practice. Instead, prayer is seen as a springboard into Spirit-led action for Christ’s Kingdom in the world.

I will confess that I am very skeptical of the ideological basis of IHOP. At the core of the movement lies a fundamentalist, even “dominionist“(1) worldview, with an intense focus on the “end-times.” The major reason given for this movement of prayer and worship is to “hasten” the Lord’s coming, to usher in the visible return of Jesus Christ to the earth and to establish a visible Kingdom of God.

I myself do long for a final consummation of history and the final victory of the Lamb over the powers of sin and death. I do believe that God is raising Jesus up so that, “every knee should bend, in heaven and on earth and under the earth, and every tongue should confess that Jesus Christ is Lord, to the glory of God the Father.”(2) However, I tend to view this process as inward and spiritual. Rather than primarily awaiting the visible return of the Lord, my hope and experience is mainly of Christ’s inward revelation and presence, here and now.

Besides the hyper-literalist reading of the apocalyptic portions of Scripture endorsed by IHOP, I am also hesitant about their focus on emotion. God can certainly speak to us through our emotions, but 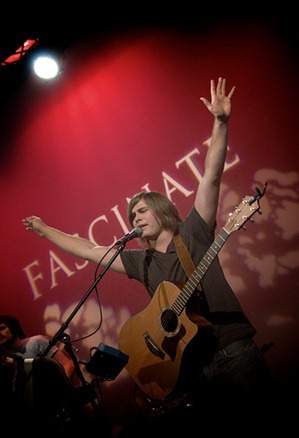 The presence of God humbles the proud and gives comfort to the oppressed. The movement of the Holy Spirit inspires humble courage, not bravado. As Christ’s presence purifies us and draws us deeper into the Kingdom life, we find ourselves not rising higher on the wings of emotion, but instead plunging deeper into the tender, unselfconscious love of our Risen Lord.

Recently, I have been reading “Come Be My Light,” a spiritual biography of Mary Teresa of Calcutta, including many personal letters between her and her confessor. The depth and humility of 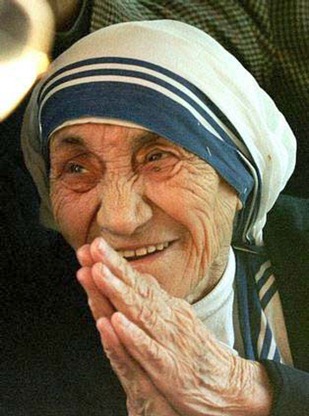 Teresa’s prayer life has challenged me to re-evaluate my own minor efforts at maintaining a connection and conversation with the Lord. Teresa’s life was bathed in prayer, and it is clear that this prayer was the foundation of her life and ministry.

I am particularly impressed at the way that Teresa’s deep devotional life led her neither to set herself above others, nor to cut herself off from the suffering of the world. Instead, she was led to such a deep engagement with suffering that she seems to have shared in Jesus’ thirst(3), and his sense of abandonment by God on the cross(4). For Teresa, rather than serving as a form of escape or emotional catharsis, prayer allowed her to venture more deeply into the suffering of her crucified savior. From this profound, first-hand knowledge of Christ’s suffering, Teresa could embrace the poor, sick and dying on the streets of Calcutta. Intimacy with the Tortured Savior gave her intimacy with the tortured lives of the poor and oppressed.

True prayer is done in the power and humility of Jesus’ cross. The purpose of prayer is not to exalt us, but to humble, purify and prepare us for lives of servanthood and friendship with those who are poor – either spiritually or materially. As disciples of the Crucified 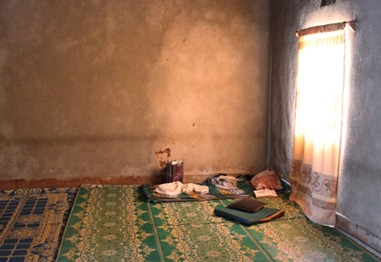 Messiah, prayer empowers us to embrace the suffering of Christ’s body.

The life of prayer and holiness that we are called to as God’s people is not a matter of establishing Christ’s outward rule over the earth. Instead, we are to be inwardly transformed, letting Jesus Christ live fully in us. If we open ourselves to him, he will shine through. Through unceasing prayer, we can become his body. Through our humble lives of self-sacrifice, suffering and service, the Word can once again become flesh. Jesus returns to reign each day in the lives of those who truly love him. As friends of Jesus, let us embrace the mission to which we are called, “completing what is lacking in Christ’s afflictions for the sake of his body, that is, the church.”(5)