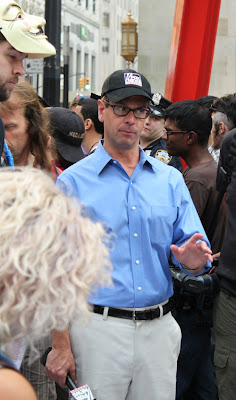 Over the last nine months, I have witnessed three phases of mainstream media coverage of the Occupy movement. Phase one was a near-total blackout. During Occupy Wall Street‘s first two weeks, the silence of the major news outlets was deafening. My social media networks were exploding with written and video coverage from alternative media about the growing uprising in lower Manhattan, but there was virtually no mention of the occupation by the for-profit news chains. During the media blackout phase, the few articles about Occupy Wall Street were either tiny blurbs that downplayed the seriousness of the uprising, or mocking stories that portrayed occupiers as silly idealists and spoiled brats.
At about two weeks in, the media environment changed considerably. The demonstrations in New York were beginning to spread to other cities, and it was clear that this was a movement that even TV news could not longer ignore. We launched Occupy DC around this time. In those early days at McPherson Square, we were swamped by reporters from around the world. Even then, the foreign press was far more interested in covering Occupy than US broadcasters were. 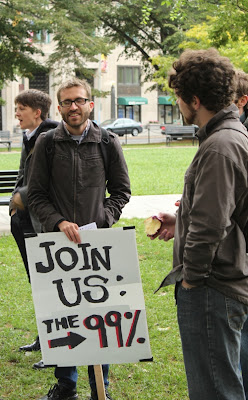 During this phase of rather intense coverage by the major news outlets, there was a consistent push to define the Occupy movement in terms of the existing two-party, corporate state. Some insisted that we were the Left’s response to the Tea Party. Others claimed that we were the heirs of the anti-globalization movement of the 1990s. Still others insisted that we were really a radical wing of the Democrat Party, working to advance Obama’s tepid agenda on Capitol Hill. Each time, we shook our heads: “No, it’s not about that at all. We want to live in a world that none of the existing parties or structures are offering us. We seek a society where living communities are valued more than corporate profit.” But most journalists refused to hear this. Perhaps they simply could not wrap their minds around a movement that was more interested in fundamentally changing our culture than in seizing political power. For whatever reason, most reporters are still trying to fit us into their constricted political landscape, into a narrow worldview that sees things primarily in terms of Red and Blue, Left and Right. 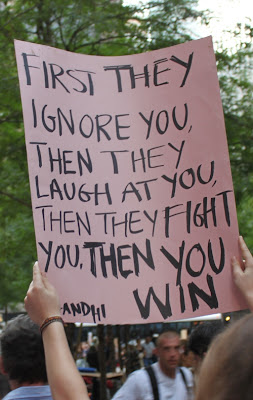 Once the Occupy encampments were either dispersed by police or stopped being sexy, the mainstream media’s posture shifted once again. Perceiving that the end of the urban encampments was the death knell of the movement, the corporate news outlets have entered into the third phase of their narrative. They were unable to silence us by ignoring us, and they ultimately failed to shoehorn us into their narrow, two-party story. The corporate news outlets have now turned to the only tactic left in their repetoire: They are trying to bury us.
This is the only way that the for-profit media can restore order. The Occupy movement has challenged the binary political worldview that forms the basis of their reporting. But if the corporate-sponsored press can consign us to the past – declare us journalistically dead – then they can begin to mold our legacy into a shape that reinforces their assumptions. After all, if we are “dead,” then they no longer have to even bother interviewing us. Dead movements cannot talk back. 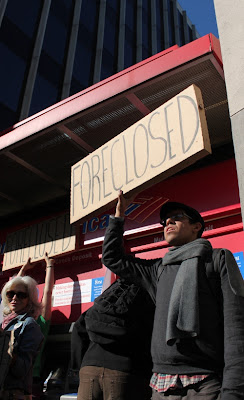 This is ultimately about control. Who controls the narrative? What is the nature of the society we live in? Are there alternatives beyond the two-party binary that increasingly delivers the same result? Are we doomed to accept the evil of two lessers? If the corporate media has its way, it will reinforce the fractured of our nation: a country divided and conquered by corporate interests who would love nothing more than to see us bicker about partisan politics while they buy up both sides of the aisle.
Make no mistake about it: This is not over. The mass demonstrations of last fall were only the first phase in a new movement for economic justice and grassroots democracy. If “the Occupy movement” refers to the tactic of public encampments as a means of mass protest, then yes, that movement has had its time. But if by “the Occupy movement” you refer to a generation’s cry against injustice – if it represents our desire to live in a society where the dignity and political voice of ordinary people is no longer trampled by elite interests – then I can tell you that the Occupy movement is alive and growing. If the Occupy tactic has passed its expiration date, the Occupy ethos is more relevant than ever. 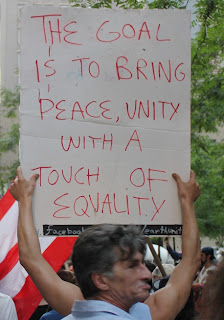 How can we allow our passion for economic justice and grassroots democracy to infuse all areas of our lives? How can we transform our existing institutions – our workplaces, faith communities, unions and local governments – into structures that more fully embody the ideals of transparency, accountability, compassion and mutual respect? What would it look like to break out of the us versus them mentality that has infested our national consciousness? How can we walk forward, together?