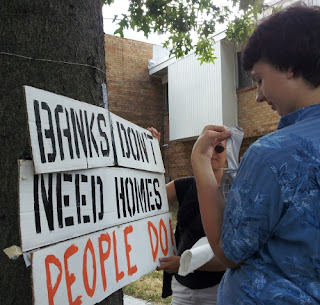 In the last eight months, I have become deeply involved in the work of Occupy Our Homes DC (OOHDC). Our goal is to prevent unjust foreclosures and evictions of homeowners and tenants in our area. We have taken a multifaceted approach that brings pressure to bear on the people and structures that are bullying our friends: We engage public officials, conventional news reporters, social media campaigns, and – of course – the banks themselves. These are areas where we are strong, and getting stronger.
But our toolbox is still missing a screwdriver or two. In my view, our most critical “growing edge” is the way we engage with the neighborhoods where our homeowners and tenants live. Our media campaign is surging; we are figuring out where the banks’ pressure points are; and we have a strong base in the DC activist community – but so far we have mostly neglected the real source of grassroots power that will make or break us as an organization. 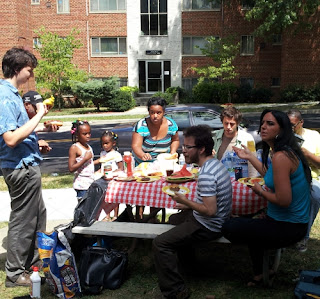 Last week, we had a community barbecue at the home of Deborah Harris. The idea was for Deborah’s neighbors to come have a hot dog and learn about the details of her case. We hoped to develop awareness within the community where the foreclosure is actually taking place, because if this could happen to Deborah, it could happen to any of us.
In preparation for the barbecue, we spent our evenings canvassing the area. We went door to door, asking folks to sign a petition to Freddie Mac; we followed up with an invite to the barbecue. These nights out in the neighborhood were the highlight of my summer! It was so amazing to get into the streets and talk to other DC residents about the issues affecting the neighborhood. By the time the barbecue rolled around, we had collected a lot of signatures and convinced some people to show up for the cook-out. Even more importantly for me, I had gained a much better understanding of the character of Deborah’s neighborhood, and of the concerns that local residents share. 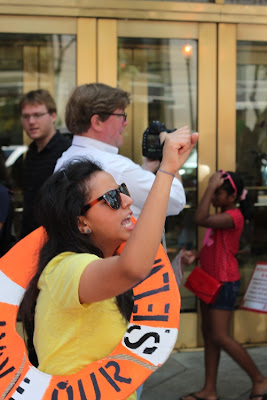 It turns out that foreclosures are not limited to Deborah’s house. When we were canvassing we met other individuals who were being thrown out of their homes by the banks, and many others knew someone who had been foreclosed on. Some of Deborah’s neighbors viewed these foreclosures as being part of a system that is pushing older, African-American residents out of the neighborhood, making way for the next wave of gentrification. There was a lot going on in Deborah’s part of town, and I felt sure that if we dug just a little deeper we would learn even more!
In my mind, getting out into the neighborhood was our first serious step into community organizing. Previously, we had largely been operating out of an advocacymodel, seeking to create change “on behalf of” affected communities. This is not what we wanted of course, but so many of us have professional backgrounds in advocacy work that it is hard to break the habit. But now I see an opportunity for us to explore models that place our local neighborhoods and community networks at the center of the process, encouraging the whole community to express their needs and to determine what is necessary to achieve their goals. 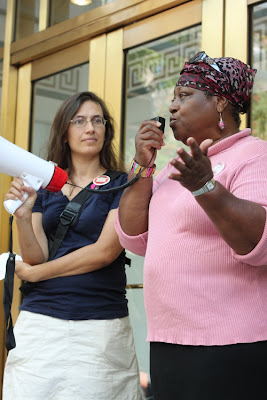 As these developments have unfolded, I have been deeply inspired by conversations with veteran organizer Laura Dungan – founder of Sunflower Community Action in Wichita, Kansas. She has taken time out to take me under her wing, nurturing me with her wealth of experience, as well as acquainting me with the example of her own mentor, Shel Trapp. I am catching a vision for what grassroots, people-centered organizing might look like here in DC.
As I begin to explore what this all means, I have a lot of questions: What is the relationship between my calling to gospel ministry and this new opening to grassroots organizing in an apparently secular setting? How can I bear testimony to the life and power of Jesus Christ, while deeply respecting and working closely with those who do not necessarily profess faith in him? What is the right balance of action and contemplation, engagement with the wider society and grounding within the Church? What steps can I take to be sure that I ask in every moment and situation: “Lord, show me where you are at work. Use my life to reveal your hidden power and love.”