Skip to content
I was at an organizing meeting recently where we were discussing our vision for moving forward a particular campaign. Our group had already experienced some major success, and we were considering how we could take these efforts to the next level, and what our shared objectives might be in the long term. It had the potential to be a good discussion, to clarify how we wanted to work together to achieve concrete goals. 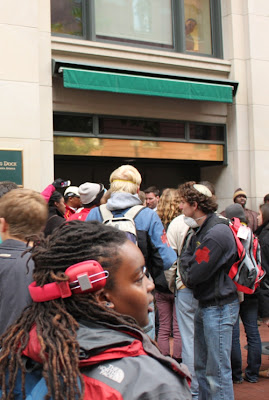 Instead, we engaged in a mostly fruitless debate about macroeconomic principles. We had among us moderate supporters of the Democrat party, Libertarians, Anarchists, Socialists and Christians. Each of us had a different take on what an ideal world would look like. Rather than focusing primarily on the specific objectives that we as a community could accomplish, we were sucked into an airy discussion about how to landscape utopia.

For those of us involved in the Occupy movement, it is easy to get seduced by ideology. We are idealistic people, and sometimes we simply assume that everyone else in the movement shares our own particular ideals. But in reality, the Occupy movement is made up of all sorts of people. We embrace a huge variety of dreams and visions. This ideological diversity can be frustrating, and it is easy to fall into an endless debate about what the world should look like someday. There is a temptation to try to hash out ideological uniformity before moving forward. 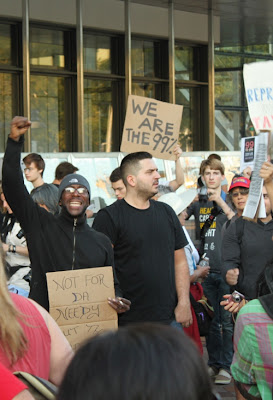 Yet, it is a temptation. If we choose to go down the road of ideological purity, this whole movement will stall out. The participants of the Occupy movement come out of a variety of irreconcilable worldviews, and we are not going to harmonize these views by talking through them – much less convince everyone to adopt a party line. If we attempt to do so, the Occupy movement will disintegrate into theoretical squabbling that distracts us from the real business at hand – making concrete gains for ordinary working Americans.

None of this is to say that ideology is bad. We all need a vision to help keep us on track, and many of us are part of communities gathered around a specific vision. These groups can help to empower the whole movement. But the Occupy movement is not primarily an ideological movement. Certainly, there are certain broad principles that occupiers everywhere hold to – that 1% of the population should not control most of the wealth and dominate public discourse, for example – but the Occupy movement does not represent a monolithic vision for what, exactly, a just and democratic society should look like. We are part of a broad movement, encompassing a whole spectrum of ideologies and organizations. 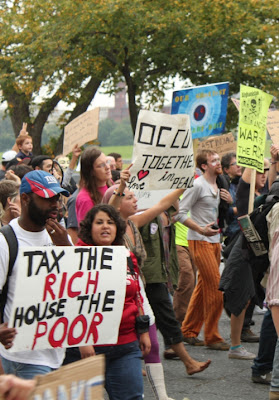 I say all this as someone who has a definite ideological bent. There are certain ways that I would like to see our society run, and I hope that the Occupy movement will move our society closer to that vision. Nevertheless, I recognize that there are other perspectives within the movement, many of which are sharply at odds with my own. Despite these differences, we can work together harmoniously when we focus on concrete actions, rather than some distant, philosophical endgame. Today, we are making practical gains for justice. We can continue to do so, despite our disagreements about what utopia looks like.

As a Christian, my ultimate desire is to see all people living in the peace and beauty of God’s power. I want to see the fearless love and radical justice of Jesus fill the world and transform our whole society. Yet, I recognize that this kind of total transformation comes through small acts of practical faithfulness – caring for modern-day orphans and widows, and seeking liberation for the oppressed. I trust that if I am faithful in the work that I have been given today, God will take care of tomorrow. Rather than trying to determine what the whole structure will ultimately look like, I can be most faithful – and, ultimately, most effective – by simply picking up the brick that I have been given and setting it in place.