Skip to content
Dear friends in Truth,
This month, I have been deeply involved in the Occupy movement here in Washington, DC. We launched Occupy DC at the beginning of October, and the following month has been one of strengthening, developing, and seeking to unify the movement into an effective force for change. My role in this process has changed over time. Early on, my focus was primarily on the work of facilitation – ensuring that our decision-making process was functioning properly. Once we got the facilitation team stabilized, I shifted my energies to outreach. I worked to develop ongoing efforts to reach out on behalf of Occupy DC, especially through direct leafleting on city streets. 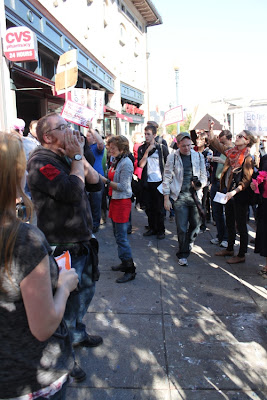 In recent weeks, my role has shifted again: I have become increasingly involved in outreach to people of faith, especially Christians. This began in collaboration with Brian Merritt, a Christian pastor who was involved very early on in developing space for people of faith to gather and support one another. We hope that people of faith will help ground the movement in the peace and stability that only God can provide.
We have participated in gatherings of religious leaders who are seeking ways to be supportive of the Occupy movement. I have also begun to give talks to Quakers in the DC area about the nature of the Occupation, and how Friends can get involved. This looks to be an ongoing effort, as these grassroots efforts for change are only intensifying. 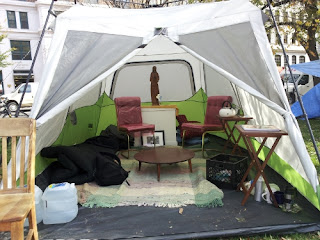 Perhaps the most visible thing that we Christians at Occupy DC have done is to erect the Prayer Tent. Complete with an altar, religious art and furniture, we have established a small chapel in the midst of the camp, which serves as the base of operations for the ecumenical Christian presence in the camp. We have begun to hold weekly worship services on Saturday afternoons, and we are doing our best to be available on a daily basis to our fellow occupiers. The Prayer Tent presents a great opportunity to practice a ministry of presence and listening.
A big priority for us is getting folks to take a shift sleeping in the chapel at night. This is extremely important given that the Prayer Tent has been abused repeatedly in our absence. We need a continuous presence to preserve the space, and would welcome anyone who feels able to come out, whether for a few hours or to spend the night. For my part, I plan to sleep out this Wednesday night with another member of Capitol Hill Friends. 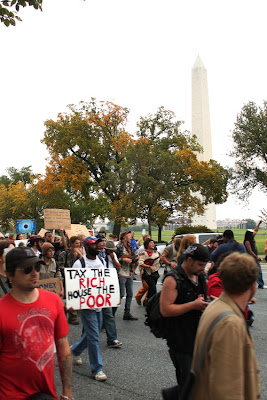 While the Christian presence at Occupy DC is still struggling to take its first steps, the Occupation as a whole is growing up fast. With perhaps thousands of individuals participating on some level, and many hundreds showing up for actions, Occupy DC has reached a delicate moment in its development. While most of the occupiers are people of good will, there is a small minority that is more concerned with expressing pent-up rage and aggression than with advancing the cause of truth. This is a huge challenge for us as a movement, since we have no centralized leadership to impose order on the various tendencies that are now found under the Occupy DC umbrella.
On Friday night, we had a very successful march and demonstration at the Washington Convention Center, where the Koch Brothers‘ Americans for Prosperity was holding a gathering for their supporters. The action overall was solid, but there were some individuals who were taking actions that were more aggressive than most of us were comfortable with. While we were able to mitigate their impact to some degree, we had a number of people who were behaving rudely, even aggressively. 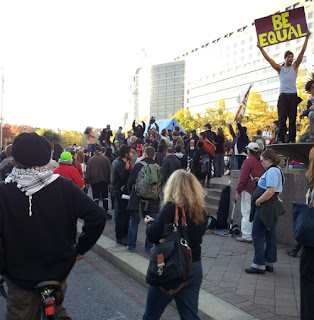 To be clear, Occupy DC committed no acts of violence or vandalism. On the contrary, the only violence Friday night was that which was perpetrated on us by others. Nevertheless, it is clear that some of our people overstepped the bounds of civil discourse. This saddens me on multiple levels. As a supporter of this movement, it seems tragic that the good work of so many might be undercut by the lack of discipline on the part of a few. As a Christian, it is disappointing that some of us are not yet ready to return love for hate, forgiving those who sin against us.
The Occupy movement is not perfect. It is made up of a huge assortment of individuals, some of whom hold worldviews that I find false and life-denying. Nevertheless, I still believe that the Occupation on the whole is coming from the right place. We have the opportunity to stand as a prophetic voice in a country that for too long has ignored our own arrogance and greed. Yet, we must be wary of the temptation to give ourselves over to our own arrogance and short-sightedness. 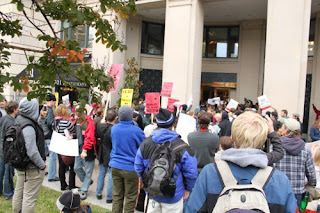 My prayer for this movement is that we might move beyond the need to prove ourselves with blustery words and grandstanding. Instead, I hope that we will stand humbly, with a simple message of repentance for a proud nation. This is all I have to offer.
With all the energy I have poured into Occupy DC, I have grown increasingly aware of the need to take extra time out to focus on nurturing Capitol Hill Friends. In the last week or so, I have been re-orienting my life to balance the needs of both the Occupation and of Friends in the local church. 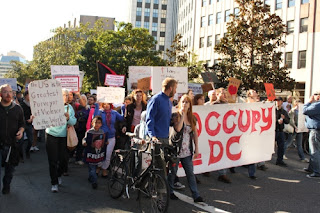 I feel like I am reaching an equilibrium. After a month and a half of disorienting novelty and change in my daily routine, a new “normal” seems to be emerging. It is a life in which my attention and energy are split between family, the Church and the Occupation. Fortunately, there’s a fair amount of overlap. My understanding of ministry has been greatly enhanced by the organizing I have done for Occupy DC, and I value greatly the new relationships I am building with church leaders here in DC.
Perhaps the hardest thing for me to balance so far is my need for ongoing study and prayer. While I have kept up my usual prayers and Scripture reading, I often feel very accelerated and unfocused. It is hard to stay grounded and aware of the Lord’s presence when there is so much to do. Especially in a movement like this, where the details unfold at the speed of Internet. Sometimes, I just have to unplug. 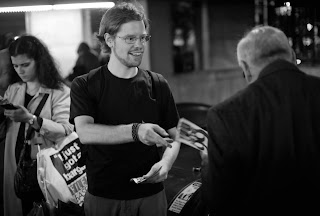 I have been grateful for all of you who have been praying for me during this very exciting, stressful time. I feel like my life is in a momentous transition; everything is changing. I need God’s help to stay rooted in that life and power from which all positive change emerges. Please continue to pray for me, and for all of the brothers and sisters here in DC.
Your friend in our Lord Jesus,
Micah