Bowing to intense pressure from Republican members of Congress, the United States Park Police agreed to begin enforcing park regulations that prohibit Occupy DC demonstrators from sleeping on park grounds. Park Police announced that they would begin enforcing the no-sleeping statutes at noon on Monday, January 30th. Tents would still be allowed as acts of political speech, but sleeping in the park would be curtailed. 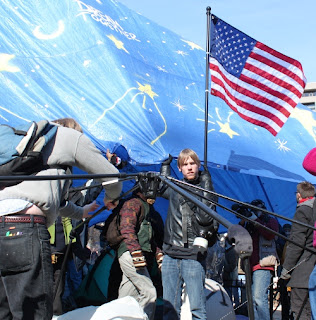 At McPherson Square, the site of the original Occupy DC encampment, hundreds of occupiers – along with roughly equal numbers of press – gathered Monday morning in anticipation of the noon deadline. I arrived with concerns that things might get out of control, with folks feeling like they needed to defend their homes from the police. I was relieved to find that the atmosphere in the park was up-beat, even festive.
As I walked through the crowd, I encountered dozens of people that I had not seen in weeks, even months. It felt like a family reunion, with most of the folks who had been involved since the early days showing up to bear witness to what might be the last day of the encampment at McPherson Square. It was beautiful to see all these people whom I had come to know and love over the course of the last four months, to be gathered together in support of this movement that we had helped to birth. 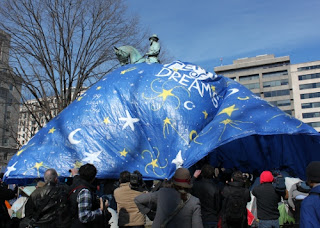 At noon, as we awaited the arrival of the Park Police, a number of occupiers erected an enormous, improvised tent structure over the statue of General McPherson. This expansive, beautiful, blue tarp was covered in hand-made artwork, and bore the words, “Tent of Dreams,” written out in enormous letters. We were all entranced as the canopy went up. It was billowing and gorgeous. Somehow, in that moment, it captured the spirit of our movement; our shared desire to be a society that can dream big, and that has the courage to pursue those dreams with daring grassroots action. 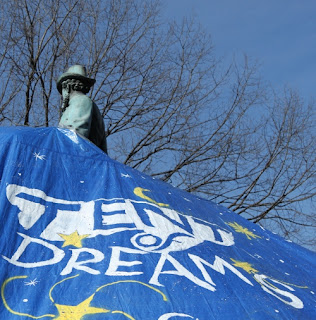 The Occupy movement is not about a park. It is not about camping. It is not even about protest, per se. The core of this movement is our shared faith that ordinary people are capable of actively shaping the policies that govern our future, participating in the decisions that affect our lives. The Occupy movement is about dreaming big, and then taking on the practical work of turning those dreams into reality. We – the ordinary, working-class people of this nation – have both the capacity and the moral obligation to make our voices heard in a political process that presently serves overwhelmingly the interests of billionaires and huge corporations. Together, we are strong, if we choose to be. 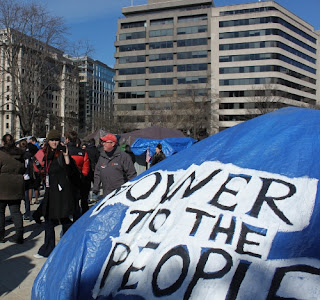 How can we live into the dream that this park and this tent represent? How can we reclaim our public spaces as centers of common discourse, decision-making and empowerment? How can we invest in our local communities – our neighborhoods, workplaces, schools and places of worship? What would it look like to have a society where ordinary people were empowered to take responsibility for making the decisions that directly impact their lives? Do we dare to dream of a future in which all of us have a voice in our democratic institutions?
Somehow, on this Monday afternoon in late January, we got another small glimpse of what that might look like. Let’s hold that thought.