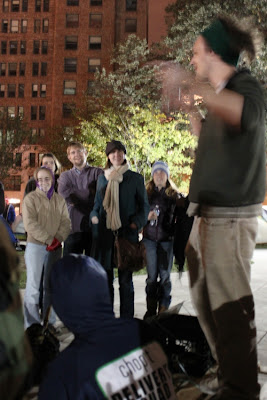 Occupy DC received a visit last night from Quaker musician and poet Jon Watts. In the shadow of a horse-mounted General McPherson, Jon played a short set, including many of the songs from his latest album, Clothe Yourself in Righteousness. He also shared a brand new song, inspired by the Occupy Wall Street movement.
Playing an impromptu concert in McPherson Square is challenging. Jon had no amplification, and was forced to compete with the chaos of police sirens, traffic noise, a nearby drum circle and repeated “mic checked” announcements from other occupiers. It took Jon a while to navigate these obstacles, and the beginning of the set was really hard. By the end, though, Jon was able to capture the mood of the crowd and speak to their hearts in a really beautiful way. 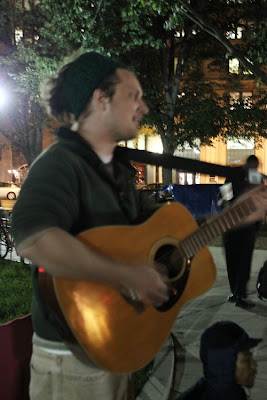 Ever since traveling to New York City almost a month ago to participate in Occupy Wall Street, it has seemed to me that what we need more than anything in this movement is beauty. The chanting of slogans has its place, but the shrill voices of street protest can never win our hearts.
Through Jon’s faithful musical witness, there were moments last night when I felt we began to discover the true Source of our unity. Jon’s poetry came alive in a new way in McPherson Square. His art emerged from the theoretical confines of digital recording and was birthed into the living struggle for love and justice.
Jon had never played for an audience like this one. He is used to playing in meetinghouses and at Quaker events, where he can count on his audience being quiet and attentive. At Occupy DC, Jon had to fight hard for people’s ears. The occupiers had to be convinced by the beauty of Jon’s message. 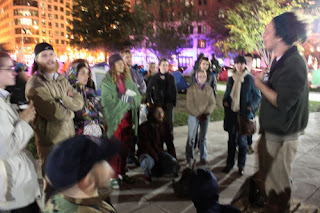 Many were. The music that Jon played and the words that he spoke hit home with power and depth. The challenge was greater than ever before; but so too was the reward.
I am grateful for the ministry that Christ is doing through Jon’s musical and poetic witness. I pray that the Lord will continue to bless this movement with beauty that blesses and calls us deeper into the transformation that God is asking of us.