Skip to content
A debate has erupted in the online Quaker world: How is God calling us to relate to the rich heritage of the Quaker movement? In a sharp essay for Quaker Life Magazine, David Johns argues that the purpose of our life together is not to be Quakers, but to live in the Spirit that gave rise to Quakerism in the first place. I followed David’s lead, arguing that Being Quaker Is Not The Point. This was followed by responses from Susanne Kromberg and Brent Bill, who shared their own perspectives on what the point is – or should be. There have also been many comments, on the posts and on Facebook.
I’m really grateful to everyone who has contributed to this conversation so far. Whether or not we share the same perspective, the very fact that we are willing to engage in this dialogue shows how serious many of us take the question of who we are called to be as Friends of Jesus. I hope to continue in that spirit.
Paul’s Shipwreck 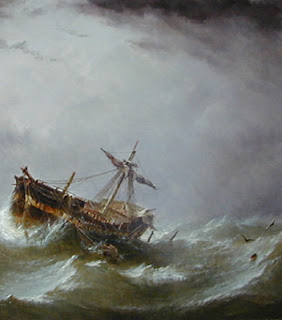 I was recently reading in the Book of Acts, where Paul has been imprisoned and is being transported by sea to Rome. During the course of his journey, the ship that Paul is on gets caught in a hurricane-force storm, which ultimately destroys the vessel and forces everyone to swim ashore on a nearby island.

I had read this story many times before, and it had always been an exciting tale. A death-defying escape from a shipwreck in the middle of a storm – very cinematic! But this time around, I felt the text opening up to me in a fresh way. No longer is this simply an account of Paul’s survival at sea: It is an allegory for the challenge that we face today as communities gathered in Jesus.
The story goes something like this:
When the storm begins to overwhelm the ship, the crewmembers start throwing things overboard. First, they ditch their cargo. Next, in desperation, they toss the ship’s tackle into the sea. Still, the storm continues, and the crew loses all hope of being saved.

Finally, when all of their hopes are gone, Paul gives them good news: God has revealed to him that everyone is going to survive. The ship, however, will be lost – forced to run aground on some island.

Paul tells everyone to eat. They had all been fasting, but they will need all of their strength to survive. Once everyone has eaten their fill, the last of the ship’s cargo – their entire food supply – is thrown overboard.
Finally, the moment comes: The ship runs aground off an island. The vessel cannot be saved, but Paul promises that every person aboard will survive if they trust in God’s command: It is time for them to swim.
Facing Our Own Shipwreck 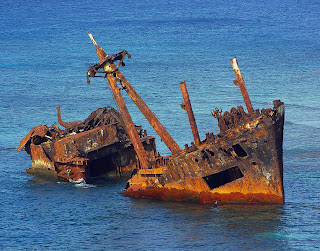 I believe that we – the North American Church in general, and the Quaker community in particular – are facing just such a moment of decision. The christendom ship that we have been sailing in for so long can carry us no further. In our desperation, we have tried throwing cargo overboard, ditching the tackle and trying creative tricks with our sea anchors. Despite all our efforts, however, the Lord has spoken: This old boat will not make it.

But this is not the end of the story. There is good news! The destruction of the ship – the loss of our old ways of being the Church – does not have to mean the destruction of the crew. Many of our institutions, structures, traditions and ways of viewing the world have run aground on the rocks of postmodern America. But there is hope. There is an island nearby – a fresh frontier with new people, new challenges – and yes, new boats. Are we ready to swim for it?
Good Food for Swimming
For me, personally, the most powerful image of this story from the Book of Acts is that of the ship’s crew breaking bread together amidst the storm. They filled themselves with the good grain that was available to them in the ship’s hold. They ate as much of it as they could, knowing that this nourishment would give them the strength they needed to make it to land. 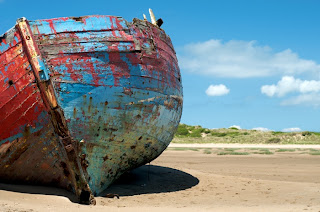 The good grain of the Quaker tradition is essential for me as I prepare to plunge into the water. It is this wholesome bread, kneaded and baked by my spiritual ancestors, that is going to sustain my aching muscles as I swim for shore. Everything that comes next – new lands, new foods, new boats – all of it depends on the goodness that I receive in this holy meal.

But preparation cannot last forever. Whether swimming freestyle or using a piece of the ship for a flotation device, we must make it to shore. Whatever that new land looks like, whatever challenges await, it is there that Christ will continue to provide for us and guide us into the next steps we must take together.