Then the LORD said to Moses, “Go down, because your people, whom you brought up out of Egypt, have become corrupt. They have been quick to turn away from what I commanded them and have made themselves an idol cast in the shape of a calf. They have bowed down to it and sacrificed to it and have said, ‘These are your gods, Israel, who brought you up out of Egypt.’ – Exodus 32:7-8 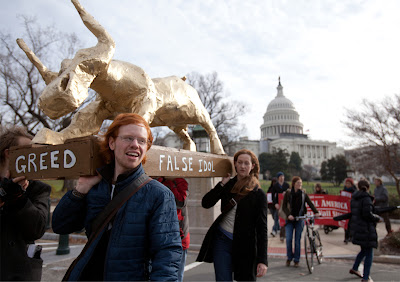 Yesterday morning, I helped deliver a golden calf to Congress. Starting off at the Occupy DC encampment in McPherson Square, we bore a shining paper-maché bull approximately two miles to the US Capitol Building as a sign of our spiritual condition as a nation that worships greed rather than God; a society that values profits over people. This demonstration brought together people of faith – especially Christians and Jews – who bore witness against the unjust economic systems that have taken root in our nation.

The image of the golden calf is an ancient one, shared by the three Abrahamic religions – Judaism, Christianity and Islam. It represents the fearful worship of money; the denial of God in the rush for man-made security and prosperity. Human society is always a struggle between our tendency to worship the golden calf of our own frightened selfishness and our true calling as children of the God of mercy, justice and truth. 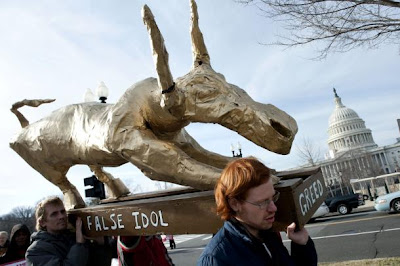 Unfortunately, our nation is caught in a downward spiral of Wealth-worship. We live in a country where billionaires and giant corporations pay little or no taxes; yet this same nation is cutting social services for the mentally ill, homeless, disabled, and working poor. We live in a society where working families are being evicted from their homes while the banks that dreamed up their bad loans have been rewarded – bailed out from a mess that the poor and middle classes have been left to clean up.

Today, as we stood before the halls of power in the wealthiest country in human history, we proclaimed God’s righteous anger; anger against an economy and government that oppresses the poor so that the rich can inflate their already obscene wealth. We sought to remind lawmakers of God’s judgment against those who abuse their positions of authority, abandoning the most vulnerable in our society and instead taking sides with those who have the most.

For me, this public witness was an outgrowth of my faith in the Lord Jesus, who began his ministry with a sermon from the sixty-first chapter of the prophet Isaiah. As we stood before the Capitol Building in prayer for our nation, I read aloud a portion of that passage of Scripture:

The Spirit of the Sovereign LORD is on me,
because the LORD has anointed me
to proclaim good news to the poor.
He has sent me to bind up the brokenhearted,
to proclaim freedom for the captives
and release from darkness for the prisoners,[a]
to proclaim the year of the LORD’s favor
and the day of vengeance of our God,
to comfort all who mourn,
and provide for those who grieve in Zion—
to bestow on them a crown of beauty
instead of ashes,
the oil of joy
instead of mourning,
and a garment of praise
instead of a spirit of despair.
They will be called oaks of righteousness,
a planting of the LORD
for the display of his splendor.
They will rebuild the ancient ruins
and restore the places long devastated;
they will renew the ruined cities
that have been devastated for generations. – Isaiah 61:1-4 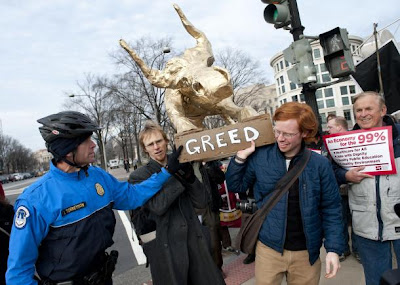 I pray that this Scripture will be fulfilled in your hearing. I pray that we as a nation will receive the grace that the Lord gave to Nineveh. I pray for God to fill our hearts with the spirit of repentance, inspiring us to put the needs of the poor and marginalized first. Let us imitate the Lord Jesus, who laid aside all honor and glory so that he could become a servant to all.