This week I am visiting the sessions of North Carolina Yearly Meeting (Conservative), sister body to my own Ohio Yearly Meeting. During my brief time among Friends here in North Carolina, I have noticed that one area of commonality between our groups is our sense of corporate witness. Friends in both OYM and NCYMc understand our faith as being not merely a matter of individual conscience, but instead a question of corporate commitment, faith and practice.

This was made clear during the business sessions this morning, when Friends here in North Carolina considered the question of their Yearly Meeting’s presence on Facebook. It turned out that an individual, years ago, had created a Facebook group for NCYMc, which most members of the Yearly Meeting had never heard about. This revelation presented an 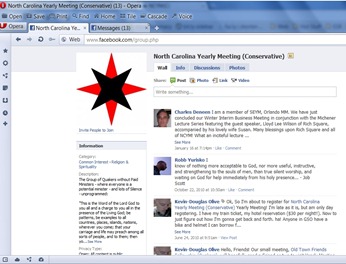 opportunity for Friends to consider how they as a Yearly Meeting might relate to this new form of communications technology.

There were also questions about the open commenting feature on the group. How would these comments reflect on the Yearly Meeting? While many Friends felt that it was not in right order to restrict public statements by individual Friends, they wondered how care and oversight might be extended to the Facebook group. In the future, might the elders of the Yearly Meeting be charged with administering the body’s Facebook presence?

I am heartened to see that Conservative Friends in Ohio and North Carolina(1) Yearly Meetings share the conviction that our Christian faith as Friends is not merely a matter of personal experience and expression. As Friends in North Carolina minuted today, “ours is an experience of a 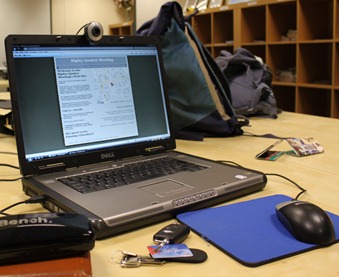 faith community, not an individual.” This is a belief and a way of life that I believe Conservative Friends hold in common.

Customs and technology change, but Friends here in North Carolina seem convinced that discernment and action based in community are worth conserving, despite the pressures of Western individualism. The new power that the internet grants for individuals to express themselves does not mean that we as Friends should abandon our tradition of waiting together as a community to find and act on the will of God. Conservative Friends are embracing new opportunities, but with a cautious eye towards preserving the unity and integrity of Christ’s body. I give thanks to God for this witness.

1. Iowa Yearly Meeting (Conservative) may share this as well, but I do not feel as qualified to speak about them, as I have not visited them in some time.