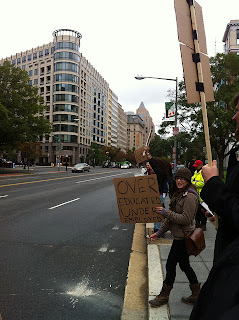 One of the most remarkable aspects of the Occupy Wall Street movement has been its use of consensus decision-making as the basis for a “leaderless” activist community. In New York and elsewhere, the movement employs a complex process – including hand gestures, procedural rules and a whole constellation of facilitators, each charged with a particular task.
In the first days of Occupy DC, we employed a different model – a slightly modified version of Quaker decision-making. Compared to the complex process employed in New York, the Quaker-derived model was streamlined, involving only a single facilitator and her assistants. The facilitator helped gather the agenda, called on individuals who wanted to speak, and generally kept us on track. 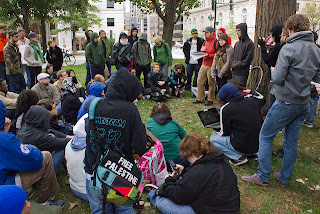 More important than the procedural details, however, are the objectives and results of the process. As I discovered this week, the Quaker process and the New York consensus model are essentially different in the ultimate outcome that they seek. While the New York model seeks baseline consent from all participants, the Quaker model encourages participants to seek truth together, and to unite around it.
On Wednesday, some individuals at Occupy DC succeeded in convincing the community to set aside the Quaker-style process that we had been using and to adopt the New York procedure. Since then, I have been witness to the practical differences between the two models. While the modified Quaker process resulted in decisions that the whole community could unite around, the new model has resulted in polarization and unexpressed discontent. The difference lies in the ultimate objective of each process. 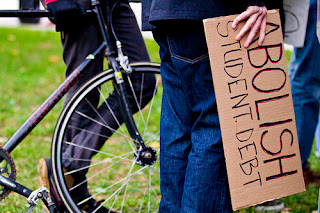 In the New York model, a decision is deemed acceptable when a majority of the participants agree with it, and the minority is willing to either stand aside or remain silent about their reservations. The process relies heavily on the power of peer pressure. Few people want to be seen as obstructionist; most of us will go along with decisions that are not intolerable, but which we do not consider to be the best.
In the New York process, decisions are routinely made with individuals “standing aside” from the decision. It is possible for an individual to block a decision, but blocking is only allowed in cases of a serious moral objection. To block a decision is to say, “if you do this, I must leave the group.” This sets a very high bar on dissent, and all but the most strident of individuals quickly learn to save their objections for the most extreme cases. 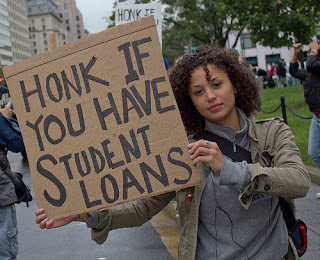 As I have seen in the last few days, this results in decisions that leave much of the community feeling disempowered and silenced. With the criterion for blocking a decision set so high, a small group of charismatic individuals can easily sway the group to make decisions that many – even most – do not consider optimal. No one wants to be the dissenter that holds the group back. In this context, “consensus” is a decision that no one in the group is willing to oppose outright by blocking.
The model derived from Quaker process is different. Rather than seeking such an inadequate consensus, the Quaker model asks participants to cooperate in seeking truth. The point of the exercise is not to build support for a particular viewpoint; instead, each person is invited to share their limited perspective. We trust that, as we hear what each individual can authentically say, the truth of the matter will begin to emerge. When we listen deeply to a variety of limited, human perspectives, the universal reveals itself. 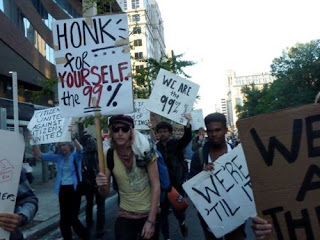 In this process – so different from New York-style consensus – success is measured by the depth of unity in the group. We know that we have reached a solid conclusion when there is a deep sense of peace and settledness in the body regarding the decision we arrive at. It is not enough to assent to a decision that represents the lowest common denominator. When we listen together with patience, gentleness and receptivity, we are brought into a unity that goes far beyond consensus. We seek nothing less than the truth for the group at that time.
I understand why the New York consensus model is so tempting. Consensus does not require trust or vulnerability. Consensus allows us to fight for our own perspective, and the New York style of consensus provides a myriad of rules and regulations to ensure the rights of the individual participant. Consensus does not require us to change. 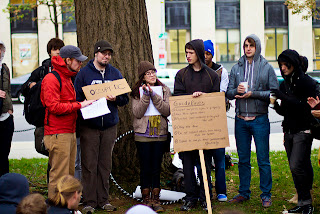 I was sad to see Occupy DC opt for the New York model of decision-making. While I sympathize with the reasons that folks would choose this path, I believe that we will be stronger if we take the risk of seeking truth rather than mere consensus. For those of us who have experienced the power that is present when a community comes fully into unity around the truth, consensus is a pale shadow.