More than usual has happened this past month. The YAF gathering came off without any major hitches, followed by volunteer service in the city of Wichita; I attended Great Plains Yearly Meeting; and, not long after that, I was able to join Friends in Illinois Yearly Meeting for their annual sessions. In the meantime, I have also stayed engaged with Friends in the DC area and in Virginia. This has been a full and fruitful time for Christ’s work in my life, and I hope that you will forgive me if I run a little long in my report.

To begin with, the 2010 Young Adult Friends Gathering was held, with divine assistance, over Memorial Day weekend in Wichita, Kansas. Young adults from across the United States and Canada – 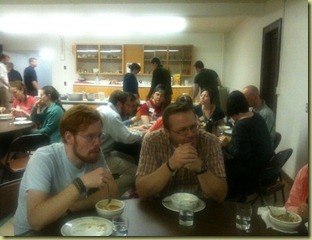 as well as a few Latin American Friends – came together,  representing twenty three Yearly Meetings. All branches of Quakerism were represented, and Liberal-Unprogrammed, orthodox and Evangelical Friends were present in roughly equal numbers, along with a few Conservative and independent Friends. 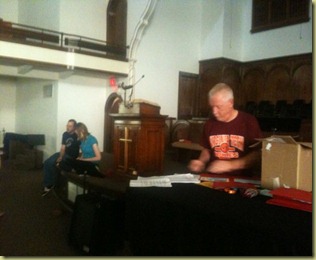 and peace, despite the difficulties we faced as we came together from our different backgrounds, cultures and perspectives. We sought God’s face together in periods of extended unprogrammed worship; we also celebrated God’s presence among us with hymns and praise music; and we received teaching from from Dave Williams of Barclay College in two of our evening sessions.

Our different beliefs and practices stretched all of us to seek that which is truly central in our life together as Friends. Some of us were exposed to far more unprogrammed worship than we were 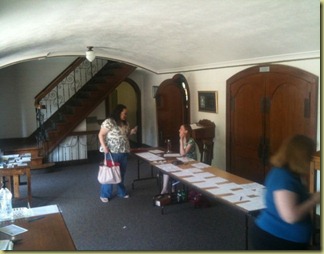 used to, while others of us were astonished to see some Friends raise their hands in adoration as we sang songs of praise to the Lord. It is safe to say that each one of us was uncomfortable some of the time, and I know for a fact that some Friends came away from the event feeling that it was a “mostly Liberal” gathering, while others came away feeling that it was an “Evangelical-oriented” conference. I think this speaks to the prophetic power of Christ’s work among us. None of us came away unchallenged.

This gathering was a wake-up call for many of us as to the reality  of the divisions within the Religious Society of Friends. The splits, 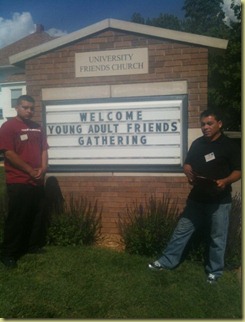 while they may have begun as disputes over seemingly minor points, have grown to a breadth and depth that we are forced to acknowledge that we are incapable of mending the wounds ourselves. It is in this surrender, this recognition of our own inability to save ourselves, that I pray that we will become receptive to the reconciling power of Christ in our hearts and in our midst as a people gathered in His Name.

The weekend gathering was followed by a few days of service. Between a half dozen and a dozen of us who had stayed on after the gathering worked with Mennonite Housing in Wichita. We did landscaping at two different sites, and we were surprised at how happy folks were to see us at Mennonite Housing and in the communities where we were working. We did not expect any gratitude for our brief time of community service, and we were humbled by the appreciation we received.

We were surprised at how simple it was to set up a work-camp for YAFs. Tyler Hampton, the main organizer for the service days, said that setting up the service project was, “the easiest thing [he] had done in [his] life.” We would like to encourage young adults to organize their own work camps through established organizations like Mennonite Housing. It can be done – and quite easily.
We concluded our service by helping Friends at Heartland Meeting to prepare their meetinghouse to host the annual 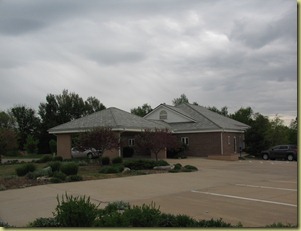 sessions of Great Plains Yearly Meeting. About half a dozen of the YAFs from the Memorial Day gathering stuck around for GPYM, and it was a blessing to have their prayerful presence with us as we conducted our business as a Yearly Meeting.

This year’s sessions of Great Plains were probably the best that I had ever experienced. We enjoyed new leadership from Laura Dungan, who has taken over as presiding clerk.  Her energy and 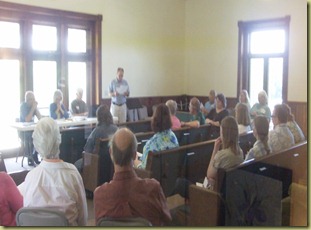 vision has been indispensable in the past year in mobilizing Friends to  take on the ministry of intervisitation in the Great  Plains region, and it was a joy to see her presiding over her first Yearly Meeting business sessions. I appreciated the discipline I saw her bring to our proceedings, and I felt blessed by both her warmth and her seriousness in the role.

We also faced great sadness together as a Yearly Meeting. We were shocked and deeply grieved to learn that our friend John Damon, an active member of Great Plains Yearly Meeting, was dying of a post-op infection following an otherwise-successful liver transplant. We were not prepared for this news, and many tears were shed over our dear friend. John was a valued member of our fellowship, and his loss is a great blow to us.

This year’s sessions were a time of letting go for me, personally. As I am now living at a considerable distance from the Great 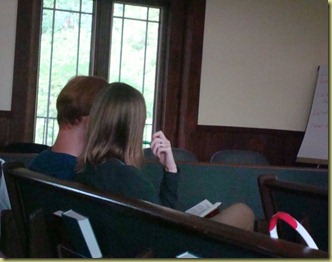 Plains and have no plans to return, it felt right to lay down my leadership roles in the Yearly Meeting. I had served as co-clerk of Ministry and Counsel, as well as serving on Continuing Committee; I stepped down from both of these positions. I feel  much gratitude to Friends in GPYM who have upheld my ministry and have allowed me to serve among them. While I am saddened that I am no longer in a position to take an active role in Yearly Meeting leadership, I am confident in the work that Christ is doing 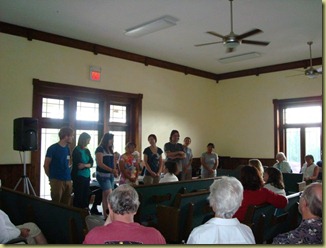 in the Yearly Meeting. The spiritual gifts that Friends need to do the work they are called to are present in the body; I pray for Friends in Great Plains Yearly Meeting the wisdom to be used in God’s service.

After a brief trip back to DC, I was once again on the road, this time out to Illinois Yearly Meeting. ILYM has its sessions near McNabb, Illinois, at the beautiful Clear Creek Meeting House. Near the meetinghouse, there is space for camping, six cabins 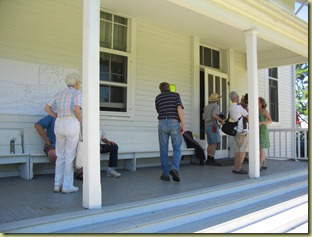 with room to sleep almost fifty, as well as another building (used by the teenagers) that can house many more. In addition to these facilities, Friends were excited last year to acquire neighboring land, including a farmhouse that they have been busily renovating since then. All in all, these Friends have a wonderful facility to host their Yearly Meeting, as well as other events as they see fit.

Having spent such a long time in cities, it was a relief to be in the 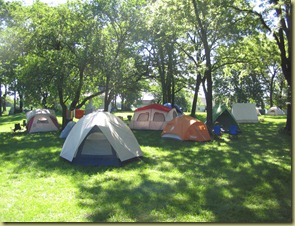 countryside and out of doors for long periods of time. For me, the site was almost magical; I was mesmerized by the sound of frogs, insects and the wind rushing through the trees, accompanied by the blinking lights of the fireflies that hung in the air throughout the camp site and across the cornfields.

This was a good environment for the ministry that I was called to do. Friends in ILYM asked me to speak to them during their first evening sessions; they asked me to share about my spiritual 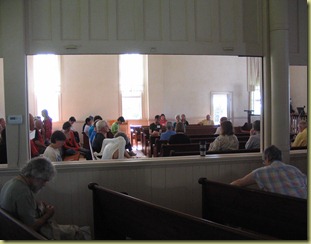 journey. No further instructions. I spent a lot of time in prayer about what I was to say, and as I arrived early at the Yearly Meeting site, I was beginning to feel around the edges of it. On the morning of the day I was to speak, I felt clear that I had been given a word from the Lord to deliver to Friends.

And so it was. That evening, I shared with Friends about my trials and stumblings as a youth; my existential despair and confusion; my eventual convincement as a Friend; and my long journey, 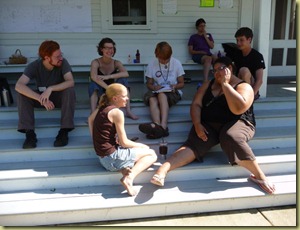 which continues, to grow closer in my walk with Christ. My message ended up being centered around listening, and I asked Friends in ILYM to consider how they taught their young people  to listen for the voice of God in their hearts. Based on the worship that followed and the comments that I received afterwards, I believe that I was faithful.

Except for a workshop which I presented the following day about the North American Young Adult Friends movement, I was mostly free to spend the rest of the sessions in prayer and 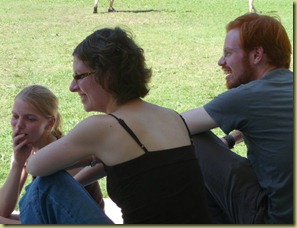 conversation with Friends. I spent much of my time with the Young Adult Friends (in ILYM called “Adult Young Friends”), and I was grateful to be available to them as they did some discernment around what they are called to as a community within ILYM. I was pleased to hear a vision emerge among them: That their  community was to be a place of transition, aiding young Quakers in the transition to full adult membership and participation in the Yearly Meeting.

It was truly a gift to be with Friends at ILYM’s sessions. I felt very warmly welcomed among them, and I look forward to how I might be of service in the future. I have seen that the Lord has blessed them with competent and Spirit-led leadership, and I am confident that God is working out God’s purposes in their midst.

The next couple of months are going to be just as intense as the last month has been. I am leaving today for Barnesville, Ohio, to attend the Wider Gathering of Conservative Friends. Following that, I will continue on in Barnesville for QuakerSpring – a unique, completely “unprogrammed” time to gather together in Christ. Finally, after a few days back in DC, I will make my way out to the Pacific Northwest for the Quaker Youth Pilgrimage, where I will serve as one of four adult leaders, serving with almost thirty high-school-aged Young Friends as we discover together our rich heritage as Quakers. I will not be back home until mid-August.
I appreciate your prayers for me as I continue to travel and minister as God leads. I hope that you will continue to hold me in the Light, and that you will let me know if you have prayer concerns that you would like me to take into my prayer life.

Your brother in the family that is Christ’s Reign,