With God’s help, and grateful for all the prayers that have been sent my direction, I have emerged from a full month with twenty-eight high-school-aged young Friends and three other adult leaders with mind, body an d spirit mostly intact.

Overall, my experience with the Quaker Youth Pilgrimage was a very positive one. Despite my anxiety going i n, I was pleased by the tight-knit community that came together over the course of the 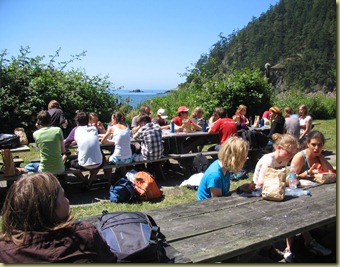 month,  both among the pilgrims and within the leadership team. The other adult leaders  impressed me with their dedication and professionalism, and I was often struck with a sense that God had planned the composition of our team. We had a good mix of gifts and background between the four of us, and I think that the Pilgrimage would have been a far less rich experience for everyone involved had any of us been absent.

The Pilgrimage took us all over Oregon and Washington state. The first major phase of our journey was a week spent at Quaker Cove 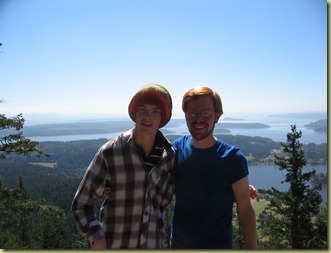 camp, near Anacortes, Washington. It was helpful for us to have this week together without the interruption of moving around. During this time, our community was able to gel to a great degree, the pilgrim committees and business process got off the ground, and  we got into a daily rhthym of worship, meals, play, 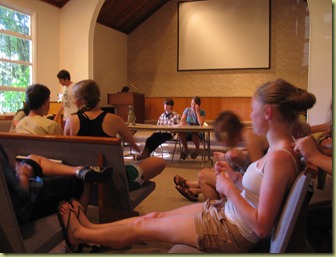 service and learning. It was a really key time for us as leaders, too, since we really did not know what we were doing and needed to spend large amounts of time meeting together and figuring out how we were going to make the next day – much less the next week – come together.

We more or less had our act together by the time we made our way back down south to stay at North Seattle Friends Church’s meetinghouse. During our time in Seattle, we continued to grow 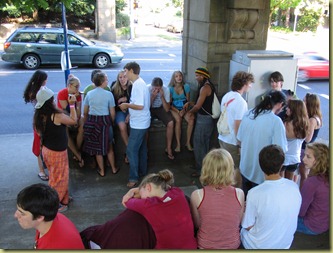 more bonded as a group, and as a sense of safety in community emerged, we were able to go deeper with one another spiritually. A key moment for the group was a worship-sharing session where we considered the question “What is holding you back?” This opened a time of raw sharing and mutual vulnerability, which I believe enhanced our ability to go deeper as a group.

Throughout the month, the pilgrims experimented with a wide variety of worship styles, ranging from fully unprogrammed, to semi-programmed and programmed. I was impressed with the way that pilgrims with no background with pastoral Friends  stepped forward to lead programmed worship services, deliver sermons and offer vocal prayer on a daily basis. This was especially 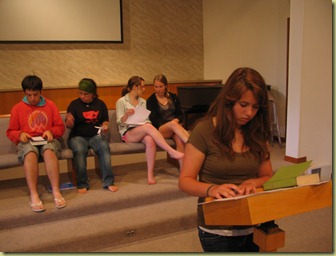 remarkable given the composition of the pilgrims, all but one of whom came from an unprogrammed background.

Pilgrims and leaders together struggled with the fact that this pilgrimage was not representative of Friends from the Americas and Europe and Middle East sections. With a solid majority of the pilgrims self-identifying as “non-theist,” the relatively liberal Northwest Yearly Meeting churches that we visited stretched us with their explicitly Christian basis and self-understandings. I was impressed with how the pilgrims stepped up to this challenge and really engaged with the rest of the Quaker family tree, even while they themselves were fairly homogenous as a group.

Our next stop was Portland, where we stayed in Multnomah Friends’ meetinghouse. We had a great time visiting area Friends Meetings, both Liberal and Evangelical, as well as exploring Portland’s downtown. I had a lot of fun when the American 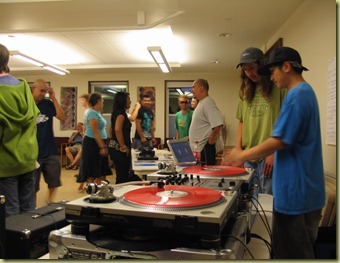 Friends Service Committee visited us and brought a hip-hop team with them who gave us a lesson in breakdancing. During our time in Portland, we took a trip to Newberg, where we got a tour of George Fox University, visited Northwest Yearly Meeting’s offices, and had dinner with some area Friends.

One of the most amazing moments of the entire Pilgrimage for me happened during our visit to Newberg. We were having dinner at Newberg Friends’ meetinghouse, and I was talking with my 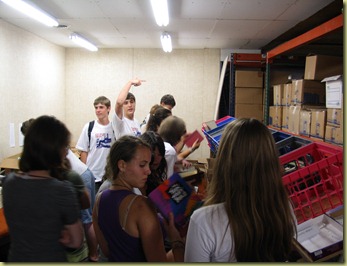 grandmother who is a member there. Since before the Pilgrimage began, I had been concerned that all of the pilgrims get a copy of the Scriptures, and this concern had only grown as our time together went on. So, I asked Nana whether she knew where we could get Bibles for everyone. She checked with Greg Lamm, pastor of 2nd Street Community Church – himself a former leader of the QYP – and he informed me that he had a friend whose ministry it was to collect used Bibles and distribute them to folks around the world who desired to have a copy of the Scriptures.

Within an hour, we were on the road in our big yellow school bus (thanks, Reedwood!) over to this friend’s house. The man literally had a used Bible warehouse in his backyard, and after explaining 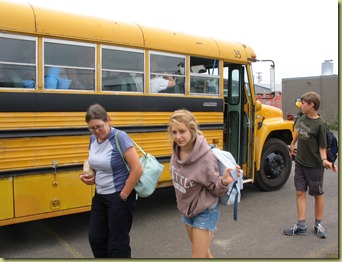 his ministry to us, he let us into the storehouse to rifle through everything he had, picking out the Bibles that appealed to us. It was such a joy watching the pilgrims get excited about having their very own copy of the Scriptures! Many of them got more than one copy (usually because they wanted a copy of the King James version, but I encouraged them to get a more accessible translation, as well). I was so grateful to God for the way God answered my prayers and placed these servants of the Lord in our path.

With the help of these Bibles, some of the pilgrims and I were able to spend several sessions together looking at what Jesus actually taught and learning the basics of how to navigate the Scriptures. 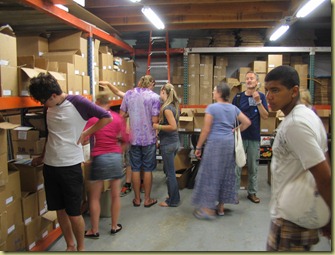 For those who participated, it was a valuable time of connecting with our Christian heritage as Friends. Many of the pilgrims felt better able to make sense of the origin of Friends testimonies after having the chance to take a brief look at the texts that inspired the early Quakers, and I am hopeful that many of the pilgrims might continue their exploration upon returning home, not letting their new Bibles gather dust.

Our next stop was Camp Magruder, a Methodist summer camp on Twin Rocks beach. On our way out to the Oregon coast, we were 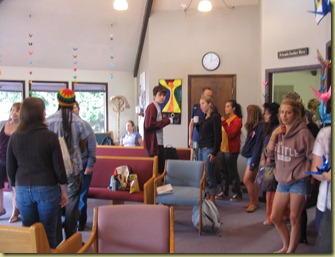 able to stop at Freedom Friends Church. It was a good chance to let the pilgrims see an Evangelical church that is, as they put it, “passionately Christ-centered and passionately inclusive.” With one of the main dividing lines between Liberal and Evangelical often being homosexuality, it was helpful to visit a church that was spanning that gap, embracing people regardless of their sexual orientation or identity, but also standing firm in their Christian faith. Most of the pilgrims thought this was pretty cool, too.
Our time at Camp Magruder was good. Apart from mealtimes – which were hideously noisy, crowded and rushed – Camp 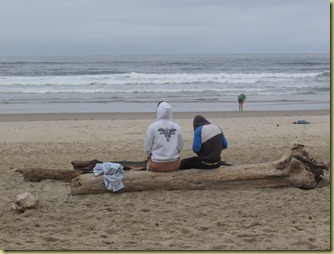 Magruder was really great location for us to spend the first part our last week together. We got to spend a lot of time soaking up the beauty of the Oregon coast; we even held a time for worship, reflection and journaling on the beach.  In many ways, it felt like the beginning of the end for us as a pilgrimage. We began to shift towards concluding our experience together.

After our time on the coast, we stayed briefly with Camas Friends Church, near Portland. I felt blessed to be able to spend a little 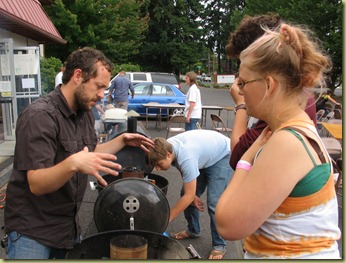 Anderson Lodge was beautiful – a wonderful location to conclude the Pilgrimage. I think just about everyone met the end of the Pilgrimage with a bittersweet combination of sadness and relief. 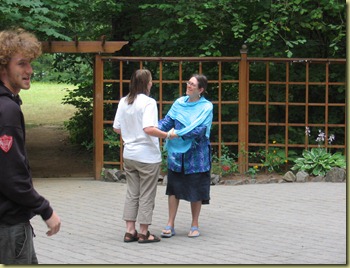 We were saddened to leave the tight-knit community that had developed over the course of the month – and for many of the pilgrims this was the first time that they had experienced any kind of community with other young Quakers. At the same time, we were weary from a full month of living with almost three dozen other people 24/7, and many of us were missing our families, loved ones and spouses.

By the time I finally arrived back in DC on August 17th, I had been away from my wife Faith for almost a month and a half. I felt very grateful to finally be home again. 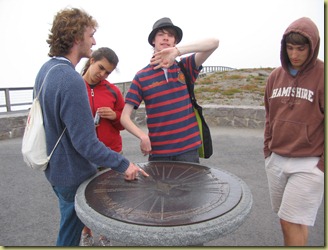 Even so, I must admit that there were moments on my trans-continental train ride that I teared up thinking about the pilgrims and what we had shared together. I carry these young Friends in my heart, and I pray that God will continue to care for them and help them to grow in their faith and walk with God.

I have nothing but gratitude for the time I have spent as a leader for the 2010 Quaker Youth Pilgrimage. My sense of leading to serve was confirmed time and time again along the way, and I thank God for placing me exactly where I needed to be. I love how God surprises me.

Yours in the peace and mercy of Jesus Christ,