Skip to content
Since the Occupy movement began almost two months ago, we have been under steady pressure. From the beginning, in New York, we suffered unprovoked violence on the part of the police. In recent days, these attacks have only increased in severity as the Occupation spreads across the country. 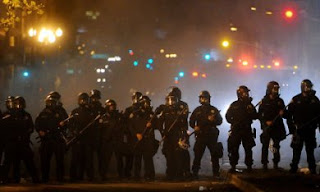 The good news is, the attempts to neutralize the Occupy movement with force have failed. Every time the police have unleashed violence upon us, we have grown in numbers and resolve. The world is indeed watching, and the people know injustice when they see it. One lesson of the past months is clear: violence against unarmed, peaceful demonstrators only strengthens the movement for change. 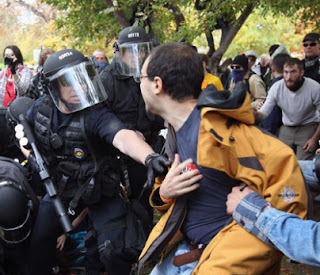 So far, we have stood our ground as a movement committed to the practice of nonviolence. Despite vicious provocation by security forces, there have been remarkably few instances of violent acts on the part of demonstrators. Given how angry many of us are, and how intense the repression has been in some places, this is a major accomplishment.
But this is just the beginning. The various police agencies in this country are led by intelligent, calculating people. The police are well-aware of the power of mass nonviolent resistance, and they are working skillfully to undermine it.(1) 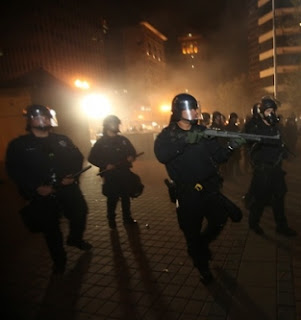 The enemies of the Occupy movement want nothing more than for us to abandon our commitment to nonviolent direct action. They want us to try to defend ourselves from the brutality of the police; they want us to hit back. They want us to break windows and spraypaint grafitti. They need this desperately, for as long as we refuse to fight on their terms, they are powerless to stop us. Only by provoking us to violence can they assume the mantle of “law and order,” tamping down on our “anarchy.” 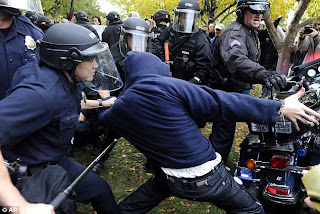 We must not allow the violence and calculated provocation of the security apparatus lure us into retaliation. Police around the country are beginning to shift tactics, and their ultimate goal is to get us to hit back. They know that, if we give into fear by striking back, they can crush us without mercy.
Nonviolent resistance is the hardest road there is. It requires incredible courage, discipline and faith. It requires a depth of hope and imagination to be able to see that receiving violence is more powerful than inflicting it. We must call upon deep reserves of spiritual strength and mental fortitude in order to stay calm in the midst of savage behavior by the authorities. This will continue to be a deep challenge; but it is the only way we can win. 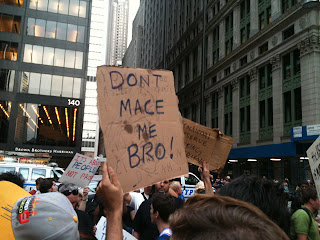 Let us recommit ourselves to the path of nonviolent non-cooperation with evil. Let us pray for the strength to look our enemies in the face and show love to those who are beating us. Let us trust in the power of love to overcome the brutal power-plays of hate. There is a love that says “no” to the darkness, that refuses to be seduced by hatred and violence. This love, if we have the courage to stand in it, will be our path to victory.
–
1. For example, view this video in which police in California attempted to provoke students into retaliatory violence:
Occupy DC Discusses Nonviolence: