Since the eviction of most of the major Occupy camp sites, including the original Occupy Wall Street encampment in lower Manhattan, many of the most cogent thinkers within the movement have come to the conclusion that the original manifestation of the Occupy movement – sleeping in public spaces, maintaining encampments twenty-four hours a day – is increasingly nonviable. In the month since the eviction of Occupy Wall Street, along with many other sites around the country, this sort of 24/7 camping has become impossible in most locales. 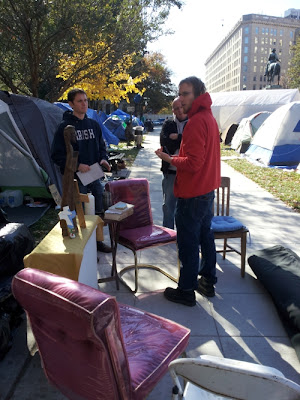 One city that still stands as an exception to this trend is Washington, DC. Occupy DC is one of the few major occupations that has been allowed to maintain a public camping presence. In some ways, this has been a real blessing. We have not suffered the trauma that many of our brothers and sisters in other cities have been forced to endure. Police violence has been almost completely absent.

Nevertheless, there are downsides to the relative ease with which we have been able to camp in McPherson Square. As many predicted in the first weeks of the Occupation, the lifestyle of urban camping has at times threatened to overshadow our real mission as a movement: challenging corporate power and preeminence in our political discourse. At times, internal camp politics has been a barrier to moving forward as a cohesive movement for change. 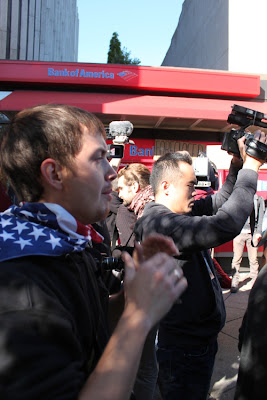 To mention just a small example of this, we in DC have had to struggle with our relationship to our city’s pre-existing homeless population. Does our mission include providing social services to those with the most desperate needs – both material and, often, psychological? Or does our inexpert attempt to play social worker distract from our core mission, to address the roots of systemic injustice? Trying to deal with everything, we have often failed to accomplish much of anything.

Even in DC, where authorities still allow us to camp out, many of us have come to the conclusion that this form of protest no longer advances our primary goals as a popular force for justice. Outdoor camping as a form of protest was incredibly effective in the early days of the movement; but many of us – even here in DC – believe the time has come for a new strategy.

What might this be? How do we translate our initial surge of energy, fueled by inchoate indignation, into a sustainable movement for broad political reform? How can we promote a national paradigm shift away from greed and towards a love-based economy? So far, we have only identified the problem. We have not yet clearly demonstrated solutions. 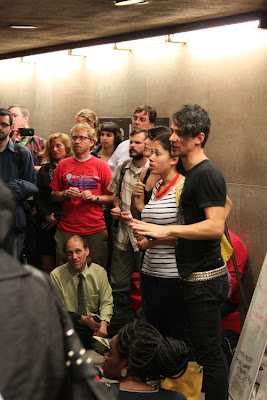 One possible way forward would be to focus our efforts on establishing local general assemblies. Rather than seeing the General Assembly as an event that only takes place in a single park in each city, what if every neighborhood had its own general assembly? What might it look like to have workplace general assemblies? Whatever the specifics, it is clearly crucial that the Occupy movement transcend the relatively small numbers that are presently gathering in parks, bars and coffeeshops.

Though we seek to give voice to the outrage of the 99% of Americans who are left without a say in how our country operates, we have by no means become as broad-based as we ought to be. If the movement is to grow and gain momentum, it will need to open its embrace to the whole of the 99% – not just those who have the time, energy and physical stamina to spend their days in frost-bitten parks. We young radicals have done our job, and done it well. But the needs of the movement are evolving. It is no longer enough to be enthusiastic and vigorous. We must be strategic, working alongside the millions of women and men who quietly support us but have no interest in playing fort. 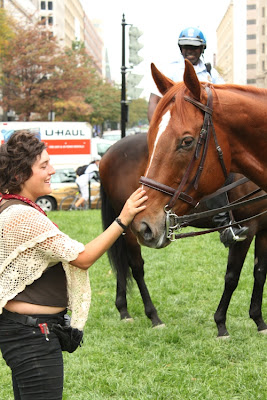 This will mean reaching out to individuals and institutions that seem decidedly non-revolutionary. Labor unions; civic organizations; all manner of non-profits; faith-based groups; and neighborhood associations – we must reach out to any group that is willing to walk with us as we take the next steps towards greater political transparency, economic justice, and peace. In this process, we must be willing to be changed. Rather than striking a belligerent pose while our movement falls to pieces, we must be willing to adapt and grow as the movement expands. This will call for us to operate at our best, bravest and most creative.