Dear friends in the Truth,

This month has been surprising for so many of us. The emergence of the Occupy Wall Street movement in mid-September has set a chain of events in motion that is impacting our public discourse in ways that we are only just beginning to understand. This movement has already deeply affected my own life. I got involved early in the occupation in New York City, and I helped do some of the earliest organizing for Occupy DC. This has been an incredible learning experience for me, and I have been reminded of my desperate need to rely on the strength and guidance that comes from the Holy Spirit. 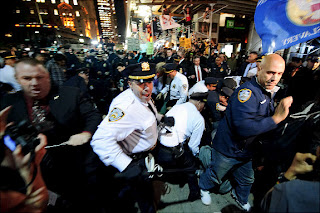 When I first learned of the demonstrations on Wall Street, I did not take them very seriously. But I began to take notice when I heard they were occupying a park in lower Manhattan and planned to stay indefinitely. The mainstream media – and even the alternative press – was mostly ignoring the story, so I investigated on Twitter and independent blogs. The more I learned, the more fascinated I became. This, I thought, could really be a sign that America is waking up.
For people of my generation, public dissent and activism had mostly been discredited. It was something that “hippies” and irrelevant leftists did – not people who wanted to be taken seriously. Occupy Wall Street, and the numerous local movements that are popping up all over the country are changing that. For the first time that I can remember, taking to the streets seems like a viable option. We can sense life there. 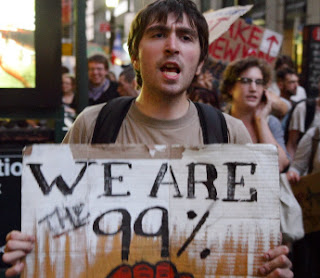 As I learned more about what was happening in New York, I felt that I needed to be personally involved. I felt a sense – I believe it was a leading of God – to travel to New York and be a witness to events there. After seeing the situation in Manhattan, I was very impressed by Occupy Wall Street. Although I still had many concerns about the particulars of the movement, I felt that I needed to stay involved.
When I returned to Washington, I linked up online with some other DC-area folks who also felt the need to participate. Over the course of a few days, we gathered in an online chat room and discussed how we wanted to move forward on starting an occupation here in our hometown. We picked a start date – October 1st – and a location – McPherson Square. The night before we began, seven of us met together in person for the first time to iron out the details of the occupation’s first hours. 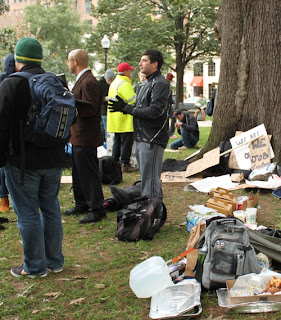 The occupation on K Street – home to a wide spectrum of monied interests and their lobbyists – has since grown to an occupation of hundreds of people. We now have an established media center, complete with an electrical generator; a welcome station; a food center with a makeshift kitchen; places for folks to sleep; and a regular gathering of the whole group for our business meeting, called the “General Assembly.” We are growing in numbers and in organization. We are learning how to organize ourselves as a movement.
What I find most incredible is that Occupy DC was started by a small group of regular folks. None of us who began Occupy DC had experience as professional activists. Each of us was simply a concerned citizen who wanted to make a difference. Just as remarkably, none of us knew each other beforehand. Though trust and friendship developed rapidly, none of us had any prior personal connections.(1) I am grateful for the way that God brought together such an improbable group of people to lay the groundwork for this movement in DC. 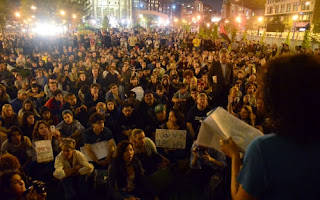 The Occupy movement continues to bring a surprising assortment of people together. We are composed of both mainstream folks and politically radical individuals. We are Christians, Jews and Muslims; we people of many faiths, as well as those who are secular. While we do not yet represent the rich cultural diversity of our city, we are committed to holding space for all people to come and let their voice be heard as we seek truth, mercy and justice together.
My reasons for being at Occupy DC are rooted in my faith in Jesus Christ. It is his proclamation of good news to the poor, release to the captives and sight to the blind, that calls me into this struggle for greater compassion and justice in this city, nation and planet.(2) It is his voice in my heart that calls me to stand with all of those who are standing up now for a more just and compassionate society. It is my prayer that Occupy DC will continue to develop as a movement that calls our nation to deeper love and responsibility, accepting Jesus’ invitation to lay down privilege for the sake of those who are marginalized and silenced. 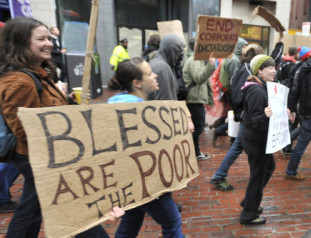 As I continue to be involved in this ongoing public conversation, I ask for your prayers. Please pray that God will guide and ground me in Christ’s tenderness and truth. Let me be a witness to his perfect love that casts out all fear. Please pray for all of those who are putting their bodies on the line to help us wake up to the condition of our nation. May we find the way forward together, bonded in the peace that comes from singleness of vision and submission to God’s will.
–
1. Of the seven, we had two couples. They knew one another beforehand, of course!
2. Luke 4:18-19