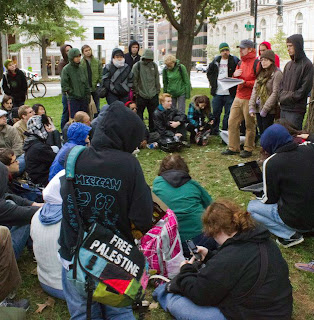 It was one year ago today, a cold and rainy October morning, when that first small band of us gathered in McPherson Square in downtown DC. We were young professionals, students, activists and organizers. Some of us had long experience in political action and organizing; many others had practically no background. But no matter how inexperienced or battle tested we were, no one had ever done anything like this before.

Just two weeks before, Occupy Wall Street had erupted in the financial district of lower Manhattan, starting a process that would galvanize untold thousands of young people across the world. The wave of transformative energy that we in the United States witnessed from afar during the Arab Spring had finally reached American shores. All of us felt the question rising within us: What might “regime change” look like in North America? What would it mean to break the power of the one percent, to bring human needs and ecological sustainability into the forefront of our collective consciousness? 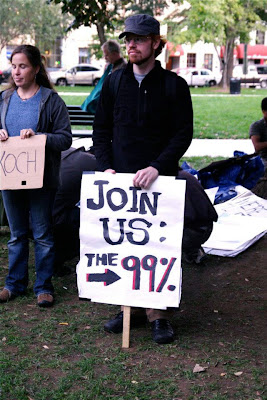 Those of us gathered in McPherson Square that day did not come together to form a political party or endorse a candidate, nor did we assemble in order to promote a platform or a unified political philosophy. Instead, we discovered together that the genius of our movement was to create space to begin asking deeper questions. As Slavoj Žižek observed in those early days at Zucotti Park in New York, we live in a society that greatly limits our social imagination. “In technology and sexuality, everything seems to be possible. You can travel to the moon… But look at the field of society and economy. There, almost everything is considered impossible.”

Though at first many of us – myself included – were baffled at Occupy’s apparent lack of concrete demands, we soon discovered that this was a sign of collective genius. By refusing to make a narrow list of demands, we instead fulfilled our true mission: to ask the right questions. Why do we live in a society where the wealthiest one percent of our citizenry controls most of the material resources and political power? What does it mean for the sustainability of a democratic society when the middle class is systematically decimated, swelling the ranks of the working poor and unemployed? What does it say about our society when public services for the most vulnerable are attacked as wasteful dependency, while welfare for giant corporations and the super-rich is regarded as an economic necessity?

What would happen if we refused to play by Wall Street’s rules? 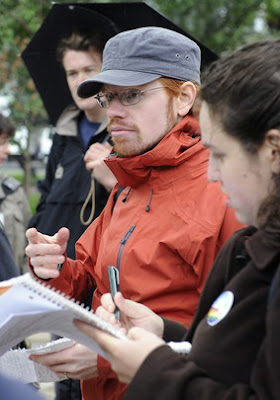 The Occupy movement has played a vital role in awakening the prophetic imagination of my generation. By creating a space where we could ask the essential questions, Occupy Wall Street has catalyzed a chain reaction whose ultimate effects are still unfolding. We will probably never know how many tens of thousands of new leaders were baptized into the work of economic justice and peace-building in the final months of 2011. And our work is just beginning.

I join many others today in remembering the amazing, surprising movement that we experienced in those early days last fall. The electricity of the moment was palpable in the autumn air. There were times when we were gathered up into a sense of collective power that made us feel larger than life. Everything seemed possible. We had no idea what might come next. 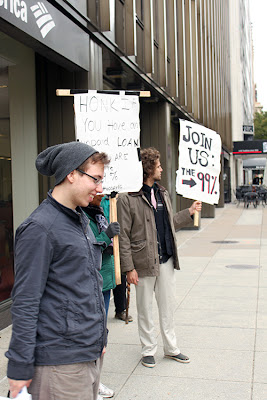 We still don’t. On this, the first anniversary of Occupy DC, I will tip my hat to those glorious early days. I will indulge briefly in nostalgia for what once was. But then I will turn my face once again to this present moment, and to the future that remains mysterious, unwritten and full of holy surprises.

Today, I recommit myself to the calling that I felt last fall. I give thanks for the work of the Spirit in our midst. It is this living Presence which gives me courage to trust that although today does not look like yesterday and tomorrow is unknown, we will be guided together if we continue to gather in hope, faith and love. Returning once again to Žižek’s impassioned speech to those gathered in Zucotti Park last October: 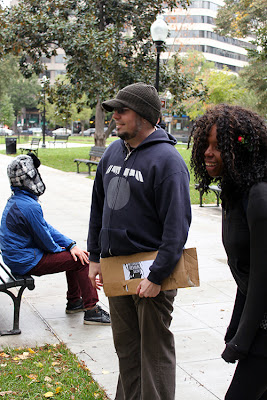 What is Christianity? It’s the Holy Spirit. What is the Holy Spirit? It’s an egalitarian community of believers who are linked by love for each other, and who only have their own freedom and responsibility to do it. In this sense, the Holy Spirit is here now. And down there on Wall Street, there are pagans who are worshiping blasphemous idols. So all we need is patience. The only thing I’m afraid of is that we will someday just go home and then we will meet once a year, drinking beer, and nostalgically remembering “What a nice time we had here.” Promise yourselves that this will not be the case.

Holy Spirit, come. Fall on us once again and give us the strength to follow your leading, regardless of how different it might be from what we once imagined. Give us courage and power, patience and humility to become poor and submit ourselves to suffering for the sake of your love. Make us like your son, Jesus, who out of love for us endured the cross and whom you have raised with power to your right hand. Help us to remember the ways you have already guided us, and then inspire us once again to step out in faith, into the hidden horizon of your next great surprise.