Dear brothers and sisters in Truth,

The past month has involved a lot of travel. From Flint, Michigan to Atlanta, Georgia, I have been all over the eastern United States visiting Friends and seeking to nurture the life of Christ in the communities I have visited. As is so often the case, I have surely received more nurture and blessing from these trips than I could possibly have bestowed on those visited. Praise God, the Father of our Lord Jesus Christ, who blesses all of us beyond our deserving and understanding!

While travel has been a big theme these past weeks, the most profound thread that is running through my life lately is a call to rootedness and stability. Throughout my time visiting among Friends, there has been a steady, persistent call: Settle. Lay roots. Patiently tend the soil. This motion of the Holy Spirit calls me out of my own thrill- 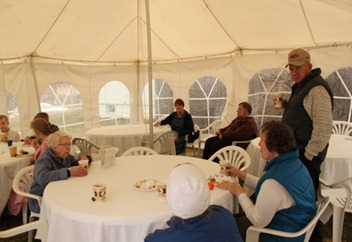 seeking and into the radiant life of broken humility that is found in the cross of Jesus Christ.

Yet, despite the call to rootedness and commitment to Christ’s work in my local context, there is still some business in the wider world that I do feel led to attend to. One such matter of business was the gathering of Stillwater Quarterly Meeting early this April. We held our sessions in Flint, Michigan, where we were hosted for the first time by Crossroads Friends Meeting. Crossroads became a full Monthly Meeting within our Quarter only recently, and so this was their first opportunity to host Quarterly Meeting. It was a blessing to be with them, and with all of the sisters and brothers who traveled from across the eastern United States to be present.

Later in the month, I was blessed to have the opportunity to visit Chattahoochee Friends, a worship group near Atlanta, Georgia, which is under the care of Rockingham 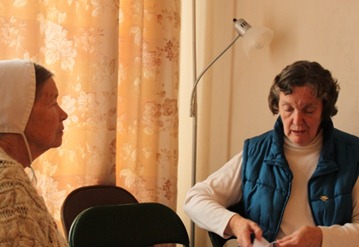 Meeting. Faith and I observed during our visit that they were quite developed in their maturity as a group. While theoretically Faith and I were visitors from the “parent body,” we received from Chattahoochee Friends a great deal of spiritual care and counsel regarding our work on Capitol Hill. We were pleased to learn a couple of weeks later that Chattahoochee Friends has decided to pursue Monthly Meeting status within Stillwater Quarterly Meeting. We are blessed to have them as part of our extended fellowship!

Shortly after the trip to Georgia, we were pleased to welcome Friends from New City Friends in Detroit on the occasion of their 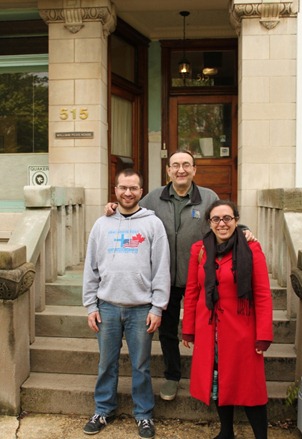 visit to Capitol Hill. Last year, New City Friends and Capitol Hill Friends jointly adopted a set of advices and queries, and since January we have been answering the queries each month. By answering the queries and reading each others responses, we have grown closer together in an organic relationship as we seek to deepen our discipleship to the Lord Jesus Christ. By holding a joint weekend retreat in Washington this month, we were blessed with the opportunity to grow closer still, strengthening the bonds of unity that we share in the Lord.

Finally, I also had occasion recently to travel among Friends in the Philadelphia area. It has been amazing to see the work that the Lord is doing in gathering Friends in recent months, and I hope that I can be of some service in supporting the faithful brothers and sisters who are being united in the love and presence of Jesus Christ. With such abundant evidence of Christ’s work in this region, I see with my own eyes that the power of the Lord is over all!
Christ’s presence and ministry is being made visible here on Capitol Hill, too. The Spirit is gathering together a faithful community of women and men, which meets on Sunday 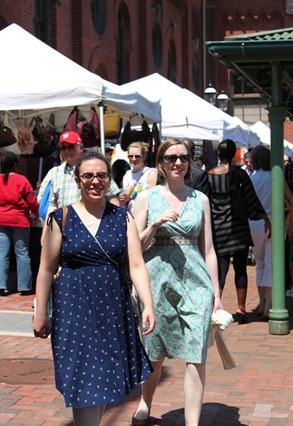 evenings at the William Penn House. Though I struggle with impatience, in my better moments I trust that our pace of development is according to God’s will. We are still in the very early stages of life as a church community; we are laying the groundwork – spiritually, socially, intellectually, and even financially – for what is to come.

I think that when we began the work here on Capitol Hill, I conceived of the labor in terms of Paul’s evangelical ministry to the gentiles. Paul preached the gospel, established new congregations and moved on fairly rapidly. I get the sense that Paul’s timeline in a city was to establish a new Meeting within a few months – maybe a year or two, at most – and then move on. I still believe this model can work under the proper conditions, but I do not believe that we are experiencing those conditions here in Washington, DC.

The soil here is relatively hard. For one thing, many DC residents are transient, expecting to be in the city for a matter of months or years – probably not decades. There is also a prevalent culture of skepticism towards all things religious – and towards orthodox Christian faith in particular. Finally, unlike in Paul’s context, where he was likely to see the conversion of entire extended families or clans, 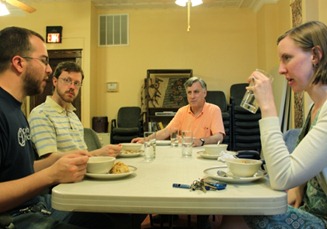 conversion and transformation is made more complicated by the extreme individualism of US urban culture. Frequently, households are divided in their faith, and having one spouse accept the invitation to become a disciple of Jesus does not necessarily mean that the other spouse, or their children, will be involved at all. We encounter here a startling lack of bonded community. Ours is a wealthy, individualized culture that feels little need to depend on others.

Under these conditions, the effort to plant a church is more akin to establishing an apple orchard than planting a vegetable garden. The labor of planting, tending and watering will take years of intensive effort before we can expect to see mature fruit.

I now harbor fewer illusions about being able to reproduce the itinerant ministry of Paul (or George Fox, for that matter). Context is important, and our context here in post-Christian urban America is atomized, complex, and requires vast investments of time and attention. To return to gardening images, it is as if we had to re- 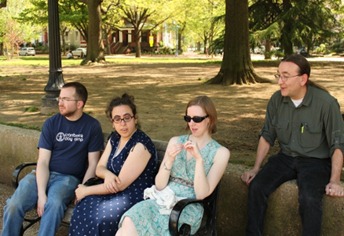 develop the soil before we can even get around to planting. Compost happens.

While I would prefer the adventure and glamour of a Pauline itinerant ministry, it feels like the needs of our context here at Capitol Hill Friends call for endurance in the nitty-gritty work of building up the soil. This is the work of many seasons, and I recognize that we are only at the beginning. I could be here for a long time.

I ask for your continuing prayers as Faith and I seek to be faithful to the Lord’s call in our life together. As we learn to yield to the humbling guidance of the Holy Spirit, we find true peace and freedom, even if it looks very different from what we might have chosen for ourselves.

In the name of the Master Gardener,