Yesterday, the March for Life descended on my neighborhood. Living just blocks from the Capitol Building, we see a lot of protests 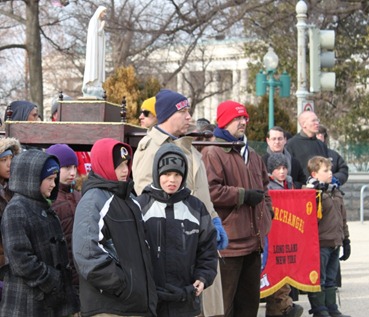 come through, and we generally do not pay much attention to any of them. However, I did take notice of the March for Life. It is a Roman Catholic youth rally that takes place every year around this time, which buses in thousands of children – mostly high school and middle school aged – to protest the continued legality of abortion in the United States. The stated goal of this rally is to end all access to abortion, regardless of circumstances. The March for Life defines human life as beginning at fertilization of the egg by sperm.

I remembered that last year’s march had been quite a spectacle, with high schoolers running amok and Roman Catholic priests and monks clogging the streets, temporarily turning the capitol grounds into a carnival of Roman religiosity. I have been getting into photography lately, and it seemed like a good opportunity to take a few photographs. So, with the motivation of capturing some interesting moments on film, I spent an hour and a half observing the 2010 March for Life.

The epicenter of the demonstration was in front of the Supreme Court, where in 1973 the Roe vs Wade decision greatly eased 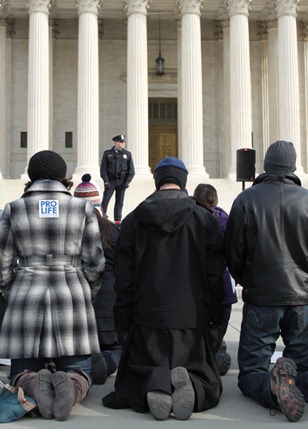 restrictions on abortions in the United States. There, Roman Catholic youth and clergy gathered, chanting prayers, lifting up images of Mary, and a variety of anti-abortion placards. While I was present, there were only a few hundred anti-abortion protesters stationed there. The rest of the many thousands of Roman Catholic youth were still rallying on the Mall, on the opposite side of the Capitol Building. Soon, they would march en masse to the Supreme Court.

In the face of the overwhelming numbers of Roman Catholic youth and clergy, a few dozen counter-protesters also gathered in front of the seat of the nation’s highest judicial authority. Most of them seemed to be college-age, some of them holding iconic NOW “Keep Abortion Legal” signs, others holding hand-made signs identifying themselves as political radicals.

For my part, I was just there to capture images, not wade into the intense feelings of the demonstrators. This was naïve on my part. 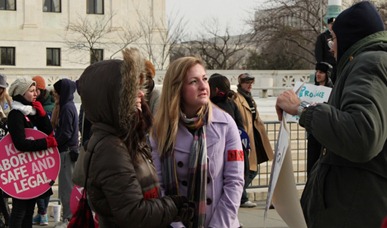 Despite my task-oriented mindset, I could not help but be affected by what I witnessed through the viewfinder of my camera. More important than what I saw was what I felt: The air was charged with conflict, energy, youthful enthusiasm and braggadocio. I myself did not know how to feel. Several times I prayed, asking the Lord, “What is happening here?” What did all this mean?

I still do not fully understand what I experienced yesterday – watching hyped-up young people chant slogans and prayers, with little distinction made between the two. I felt the shock of hearing the name of my Lord and Savior being used by so many people as a battle cry, as a talisman to be brandished at those on the other side of a contentious public policy issue. I saw thousands upon thousands of those who claim to be serving the One whom I serve relating in a way that felt so alien to the self-sacrificial way of Jesus.

Protests are often like this. I myself have participated in a number 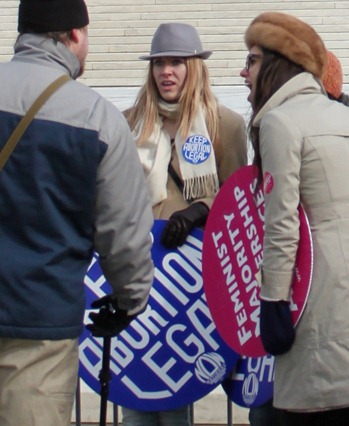 of demonstrations during my lifetime that have been possessed of a self-righteous spirit – an assurance that we were right, and “they” were deluded and evil. I am no longer convinced that these types of events, and the spiritual condition that they flow out of, are grounded in the Spirit of Jesus Christ.

Granted that abortion is a symptom of the sin and self-destructive brokenness of our age, how are we called to address the groaning creation that cries out for redemption? How are we as disciples of the Lord Jesus to live out our call to be salt and light in the world, bringing healing to the nations? How can we be a source of comfort to a world that is suffering in slavery to sin? How can we cooperate with the Holy Spirit as it reveals our fallen condition and calls us to more radiant and abundant life in Christ?

As we consider these questions, it is important to remember that one of the most ancient names for Satan is the Accuser. One of the 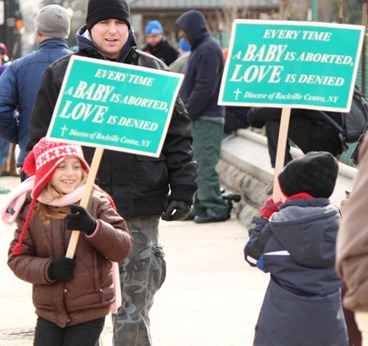 primary traits of the forces of darkness is that they seek to condemn us in our sin, rather than liberating us from it. We must take care to recognize the insidious spirit of the Accuser when it emerges: It is the voice of judgment and condemnation, damning others in their sins, rather than loving them and seeking their redemption in Christ. When we stand as witnesses for righteousness, I pray that we might speak and act under the guidance of the cleansing and liberating Spirit of Jesus.